Kohli revealed that even now when he is at the height of his popularity as an international cricketer, one person he is scared of is his coach Sharma.

New Delhi: For Virat Kohli, loyalty is paramount in relationships and that is why he believes that his bond with childhood coach Rajkumar Sharma and his IPL team Royal Challengers Bangalore (RCB) is forever. “In relationships, I always look at loyalty. From 1998, I had only one coach [Rajkumar Sharma] and that’s never going to change. I have played for one franchise in the IPL [RCB] and that’s also never going to change,” Kohli said at the launch of a new book on him ‘Driven’ written by veteran journalist Vijay Lokapally. Sitting alongside legends like Kapil Dev, Virender Sehwag and Anil Kumble, Kohli revealed that even now when he is at the height of his popularity as an international cricketer, one person he is scared of is his coach Sharma. Full Cricket Scorecard, India vs New Zealand, 2nd ODI

“He [Sharma] is the only person I am scared of a good scolding. I can’t say anything to him even now and it comes from respect. And it’s always good to have someone like that,” said Kohli. Virender Sehwag, who has now become a rage on micro-blogging site twitter regaled the audience with an anecdote from Kohli’s formative years with the Delhi Ranji team. Sehwag remembers it even more as he was told that this new kid will surpass him.

“It was Pradeep Sangwan who came and told me “Bhaiyaa, ek ladkaa hain jo aapko bhi peeche chhor dega” [Brother this boy will even surpass you]. I was curious to know who this boy is,” Sehwag said. But Sangwan’s praise for his India U19 teammate was not a misplaced one, Sehwag realised later. Book on Virat Kohli launched in New Delhi

“This was a match where Virat powerfully drove the ball. There was both long-on and long-off and yet the ball raced to the boundary and I knew he was talented. But he also remained humble all these years.” For India’s chief coach Anil Kumble, what attracts him apart from his inspirational leadership is Kohli’s ability to be flexible in certain situations.

“I love the way he prepares for his matches. Not only does he lead by example but when he makes a mistake, he has the honesty to admit it. He [Virat] would come upto you and say ‘Okay I have made a mistake. Can we discuss?’ I believe when he will look back at his wonderful career, he will be really proud of his achievements,” said India’s highest wicket-taker in both formats.

Former Team Director Ravi Shastri said: “Virat is already a great Indian cricketer and on his way towards becoming one of the all-time greats that the world has ever seen. It was a privilege to be a part of that dressing room and what attracted most was his simplicity,” said Shastri. World Cup winning captain Kapil Dev lauded Kohli’s fitness and then had an advice for him. “It’s not only about playing cricket but one also needs to have a sense of humour. You need to have the ability to laugh at yourself,” said Kapil. 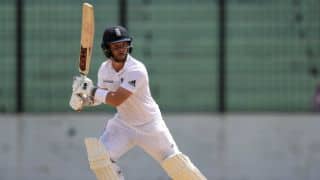