Kohli looked good during his stay at the crease but could not stretch his innings beyond 33.

New Delhi: India is currently playing Leicestershire in the 4-Day Warm Up match in Leicester. The visitors had a poor opening day as they were reduced to 246-8 at the end of Day 1. None of the batters, barring KS Bharat, could stay long enough at the wicket. Bharat remained unbeaten on 70 at the end of the day.

All eyes were on Virat Kohli as all his fans were expecting him to return to form. Kohli looked good during his stay at the crease but could not stretch his innings beyond 33.

Kohli’s act got a lot of attention from fans on social media. Former England captain Michael Vaughan also gave a hilarious reaction to Virat Kohli’s failed attempts at bat-balancing and compared him with Joe Root. “Virat not in the same Bat balancing league as Joe,” Vaughan wrote.

Virat not in the same Bat balancing league as Joe ?? https://t.co/CJSvpPVB0W

Root is not in same century league as Virat….now immediately don’t come and say that he didn’t score any century recently….Joe might be in top form currently but still the number of century that Virat has scored is still untouched

Virat is an all format GOAT, Root is only a test player

Sure enough Virat’s bat swings & scores rather than standing up on the wicket.

Yet it will take decades for England to win it

Hey…. Have you ever tried to compare what was your standard as compared to Virat… Your prime form = Virat’s poor form

Coming back to the warmup game, Indian skipper Rohit Sharma and Shubman Gill gave India a quick start but both players departed in quick succession. At one point, India was reeling at 81/5 after Hanuma Vihari (3), Shreyas Iyer (0), and Ravindra Jadeja (13) departed cheaply.

Virat Kohli and KS Bharat then stitched a 57-run stand before Kohli departed. Bharat then added another 64 runs for the eighth wicket with Umesh Yadav (23) to give some respectability to the Indian total. 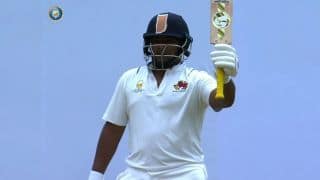 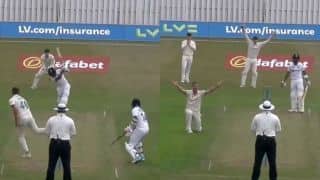 Virat Kohli's Angry Reaction After Being Given Out LBW In The Practice Game Against Leicestershire: Watch Video