Captain Virat Kohli and co. took a victory lap of the Wankhede which was thronged by cricket fans all the five days.

India ran through England tail on the fifth day morning in the fourth Test at the Wankhede Stadium, on Monday, by an innings and 36 runs. The celebration held further importance as India were defeated by 10 wickets on the same venue against England in 2012-13. Captain Virat Kohli and co. took a victory lap of the Wankhede which was thronged by cricket fans all the five days. Kohli was the star of the match with yet another double century, achieving career-best figures of 235. But the best part was yet to come. Kohli inducted a new 12th man in the team. Kohli was caught in an adorable moment when Anaya Jain, an 8-year-old girl, was given the Indian jersey at the end of the match.

The trend of inducting new 12th man has been on for past few days. It started off from Day Two with Parthiv Patel handing over the Indian jerseys to 8-year-old twins Vivaan and Vismay. At the end of Day Three, Murali Vijay, who scored century in the Mumbai Test, provided the jersey to young Dhruv Tandel. Vijay also had his story to tell. He dedicated his century to his close friend s father, who passed away recently. Vijay had specifically spoken about this special knock to bccitv.com and why this is dedicated to his close friend nicknamed Monk .

Jayant Yadav, who set a new record to his name on Sunday, was the third cricketer to present Team India jersey to 9-year-old Anaya Bansal. Jayant had a tragic story to his maiden century as well. His father Jaisingh missed the opportunity to witness his son s special feat as his mother-in-law breathed her last.

8-year-old twins – Vivaan and Vismay are the #12thMan of #TeamIndia. Here’s @parthiv9 handing over India jerseys to the duo #INDvENG pic.twitter.com/OOKGg0q9Xm

At the end of the fourth Test, Kohli won the Man of the Match for scoring his third double-century. Ravichandran Ashwin was once again awarded Bankable Player of the Match after claiming 12 wickets in the Tests and holding 27 wickets so far in this series. 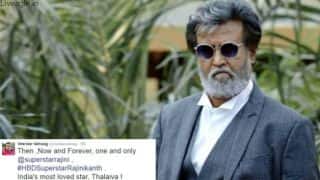