In 10 innings stretching across three formats on the ongoing tour, Kohli managed to cross 50 just once. Virat Kohli’s struggles on the ongoing tour of New Zealand ended on Sunday when he failed for one last time during the second innings as India top-order collapsed yet again putting them dangerously close to a series defeat in Christchurch.

In 10 innings stretching across three formats on the ongoing tour, Kohli managed to cross 50 just once as his team’s performance gradually took a steep dive. They began the tour with a 5-0 series whitewash in T20Is before conceding ODI series 0-3.

They are currently trailing the two-match Test series 0-1 with New Zealand having taken another giant stride towards securing the second match by reducing them to 90/6 on the second day.

“He (Kohli) is one of the best players in the world, no doubt about that,” Boult said. “Obviously, he is a big player for them and we just tried to put enough pressure on him, keep him quiet and soak up those boundary balls, and it was nice to see him make a few errors. We were lucky to get two that lined up and hit him on the pads nicely and it was a good feeling to see the back of him.”

Indian batsmen undid the good work of their bowlers who had bowled out New Zealand for 235 to hand them a slim lead of seven runs. Boult, who took three of the six Indian wickets to fall on Sunday, feels the inability to get adjusted to the conditions has resulted in the poor show from the tourists.

“Probably, they are used to playing on low and slow pitches in India and it took time for them to get adjusted. Just like if I bowl in India, it will be foreign conditions for me,” Boult said.

16 wickets fell on Sunday with the bowlers calling the shots at the Hagely Oval.

Boult said pitching the deliveries in the right areas was the reason bowlers were rewarded. “Sixteen wickets, I am not sure if that’s up there with a record in Test cricket in terms of day two but the bowlers obviously pitched the ball up nicely and got rewards. Seeing the ball move around like it did, I feel we are in a decent position,” he said.

“We are all enjoying hunting out there as a pack, getting the ball to move around. I think the bowling unit is very clear about how they are trying to target the opposition,” he added. 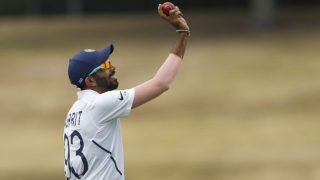 Lost More Wickets Than we Wanted to But Won’t Play The Blame Game: Jasprit Bumrah 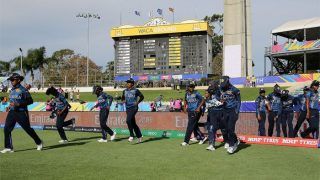