Former Australia skipper Smith retained his position at the top of the ICC Test Player Rankings after the Ashes with Kohli sitting behind him on the second spot.

Former India captain Sourav Ganguly on Monday said he did not want to compare Steve Smith and Virat Kohli, stressing that the India captain is still the best in the world but Smith’s records speak for itself.

Former Australia skipper Smith retained his position at the top of the ICC Test Player Rankings after the Ashes with Kohli sitting behind him on the second spot.

Smith’s scores of 80 and 23 have helped him remain 34 points ahead of Kohli with 937 rating points, an incredible effort since he started the series in fourth position with 857 points before his surge that came courtesy 774 runs in four Tests including a double hundred.

“These are questions not to be answered. How does it matter? It’s about performance. Virat is the best in the world at the moment. So that’s what makes us happy,” Ganguly told reporters on the sidelines of Tata Steel Kolkata 25K launch. Ganguly is the face of the event.

Asked about Smith, he said: “His records speak for itself… 26 Test hundreds which is a phenomenal record.”

Ganguly was also asked about his ambitions of becoming the next India coach. “Let one coach finish, then we will think about the other coach,” said the 47-year old with a smile on his face.

“In any case I am already a coach. I look after the Delhi Capitals in the IPL. In my first season last year, they did well. They went to the semifinals from being last for last seven years so it’s been good.”

Ravi Shastri was re-appointed as the head coach of the Indian team till November 24, 2021.

Ganguly is currently the Cricket Association of Bengal (CAB) president, besides being associated with IPL franchise Delhi Capitals as the team Advisor. He also does cricket commentary and is the host of a popular Bengali quiz show.

On MS Dhoni‘s future, Ganguly said: “I don’t know what the selectors think, what Virat thinks. They are the important persons, let them make the decision.”

Ganguly also said India are the favourites to win the T20 and Test series at home against South Africa. The first T20 got washed out in Dharamsala and the second rubber is on September 18 in Mohali. India will also play three Tests against the Proteas.

“India are favourites. India at home is a dangerous team. They are very hard to beat and that’s been the case for years,” Ganguly said. 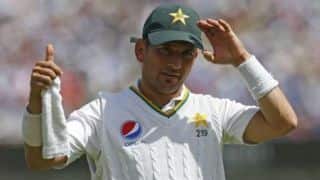