Dean Jones lavishes praise on Virat Kohli and talks about change in the Indian leadership.

Former Australia cricketer Dean Jones believes that time had come for Mahendra Singh Dhoni to take a call on his Test career, and says that Virat Kohli is the new king of world cricket with his recent appointment as Indian Test captain.

Dhoni announced retirement from Test cricket after the third Test against Australia at the Melbourne Cricket Ground (MCG) last week, which resulted in Kohli being appointed as the 32nd full-time captain of India.

Jones wrote in his column in the Sydney Morning Herald, Being captain of the Indian Test team is possibly the biggest, toughest and most demanding position in world sport. India are the power brokers and financiers of world cricket and I could not even imagine the pressures and responsibilities placed on people in this most prestigious role. Now we have a new king of world cricket, Virat Kohli.

It is interesting to note that Kohli and his predecessor MS Dhoni are exact opposites. Dhoni is quite reserved, while Kohli is combative. Like most countries around the world, India play brilliantly at home but are atrocious away. It was time for a change and Dhoni knew it and fell on his sword. The game needs India to be strong in all formats of the game. Under Dhoni, India held the No.1 Test ranking for 21 months from 2010-2011. But while India are No.2 in world one-day and Twenty20 rankings, they embarrassingly sit sixth in Test rankings, he added.

Jones believes that Kohli is someone who will never get bogged down with on-field confrontation, and it will be interesting to see how the Australians deal with the new Indian captain.

He wrote, Kohli will not back down from confrontation. If Australia want to sledge, he will sledge back. Not too many batsmen are prepared to stand up and talk back to Mitchell Johnson. Fewer still win the battle. Kohli did the same thing to his own, when he almost went toe to toe with Gautam Gambhir in an Indian Premier League (IPL) match last year. Judging from Kohli’s results, it might be time the Australians gave Kohli the silent treatment for a while – like they did to Viv Richards, Brian Lara or Tendulkar. Or will the Australians’ egos get the better of them?

Jones thinks that while the Indian fans are jubilant with the appointment of Kohli, the Indian team will find new energy and will be more successful overseas. The former Australian cricketer also thinks that there will be a big change in terms of captaincy style, which will certainly help India.

Jones wrote, Kohli knows he has big shoes to fill. He knows he can learn a lot from Dhoni’s captaincy. But he needs to lead his way. Dhoni captained the team like a python hunts for its prey. Dhoni waited for his opposition to make a mistake and would squeeze the living daylights out of them. Kohli, I feel, will try to win a game from ball one. Like Michael Clarke, Kohli is prepared to lose a match while trying to win. He is an aggressive batsman and his captaincy will not be any different.

Talking about Dhoni, Jones thinks that the 33-year-old will be missed on the Test arena, as he lavished praise on India s most capped and successful captain.

Jones concluded, He will be missed in Test cricket as he is so well respected by fans and his peers. I admired the way Dhoni handled the constant criticism by fans and the media. It was like water off a duck’s back.

And how humble was Dhoni when he captained his team to win the World Cup in 2011 and the Twenty20 World Cup in 2007? He just let the team accept all the plaudits and took a back seat. When Dhoni finally retires from all formats of the game, he will be no doubt be in India’s top 10 players of all time. 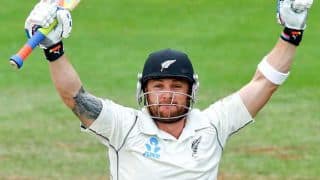