Virat Kohli was unhappy as hosts Sri Lanka hardly managed to come up with a fight and was not as challenging as he expected.

Although Indian skipper Virat Kohli was unhappy as hosts Sri Lanka hardly managed to come up with a fight and was not as challenging as he expected, he expressed his delight over a convincing 5-0 whitewash in the just-concluded One-Day International (ODI) series. India had earlier also won the three-Test series where they once again whitewashed the hosts 3-0. The fifth and final ODI saw India beat the hosts convincingly by six wickets at the R Premadasa Stadium in Colombo on Sunday, bringing an end to a perfect series so far for the Indians as Kohli terms it as a ‘complete series’ for the Indians in the tour. FULL CRICKET SCORECARD: India vs Sri Lanka 2017 5th ODI at Colombo

It’s quite amazing to have won the series 5-0, said Kohli during the post-match presentation. We always thought the shorter format is going to be much more challenging. The youngsters and the spunk on the field has worked for us. All round, it’s been a complete series for us. We’ve been playing some good cricket. We did not win three games on the trot in the shorter format before this, and now we have six in a row including the West Indies series. It will be a challenging series against Australia. We have been playing some good and consistent cricket for some time. So, this series win in Sri Lanka should boost the confidence the boys. FULL CRICKET UPDATES: India vs Sri Lanka 2017 5th ODI at Colombo

On equalling Ricky Ponting’s tally of ODI tons (30), Kohli is now only behind Sachin Tendulkar (49). By achieving another feather in his illustrious career and when told that he is on the road to match Sachin, Kohli added, “The great man (Sachin Tendulkar) is quite a bit away. That’s going to take a hell of an effort. Again, I am not thinking about that. It’s only about the team where even if I score a 90 not out and the team goes across the line, it’s good enough for me.”

Sri Lanka skipper Upul Tharanga said that it was indeed a tough time for Sri Lanka cricket. It is a very difficult time for us. We were not up to the standard. We have to improve all three departments, especially our batting. We couldn t get those big scores in all five games. We lost a few main players, but still I feel we didn’t play to our standard. It was a good toss to win. We lost a few early wickets. Thirimanne and Mathews had a good partnership. At one stage we were looking for 260-270. Unfortunately we collapsed again, said Tharanga after the 5th ODI.

Meanwhile, Man of the Series Jasprit Bumrah expressed his happiness with his performance and improvement following every game. It’s my first visit to Sri Lanka and I’m glad I did well. I was focussing on my preparation, I had time to rest before this series and it makes you hungry. It’s always a dream to play Test cricket, but I’ll wait for my chance. It’s been a long journey with [Lasith] Malinga and I’ve learnt a lot. I just want to learn and become a better bowler,” he said following the 5th ODI. 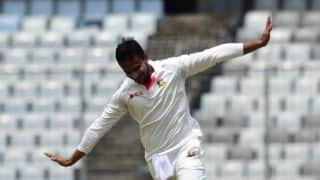