India skipper Virat Kohli on Wednesday announced that Indian opener KL Rahul would be making a comeback to the Test side for the second Test against Sri Lanka.

Having already won the opening tie, India skipper Virat Kohli on Wednesday announced that Indian opener KL Rahul would be making a comeback to the Test side for the second of the three-Test series against hosts Sri Lanka at the Sinhalese Sports Club in Colombo on Thursday. Rahul missed the opening Test at Galle owing to a viral fever, which required a hospitalisation for a couple of days. Owing to this opportunity, fellow Indian opener Shikhar Dhawan smashed a brilliant 191, while Abhinav Mukund smashed a career-best 81. However, owing to Rahul arrival in the squad, Mukund unfortunately would have to make his way out of the side. FULL CRICKET SCORECARD: India vs Sri Lanka 2017 – 2nd Test at Colombo

“KL Rahul has been our established opener. I feel one of the openers [Dhawan or Mukund] will have to make way for him because what he [Rahul] has done in the past two years for us has been very solid. He deserves to come back and start fresh in Test cricket again. We have a team meeting later on after practice and we’ll be able to clarify that then. But yes, according to me, KL [Rahul] will definitely come back into the eleven,” said Kohli.

“It is very important to make Rahul feel at ease specifically because he played the practice game as well and he looked really solid. He has batted really well in the last couple of seasons for us. It is very important for us to make him feel that this is his spot. And it won’t be changed because of unfortunate events that happen outside of the playing field or the injuries that you can’t control,” Kohli added. 2nd Test preview: Rahul’s comeback adds to selection woes; Chandimal back at helm

“That phase you have to come back, you need to get stronger. He has really stuck it out in that phase. It’s been hard for him, we all know that, because he was batting so well and then he was out because of this. It is very important to make him feel secure and he deserves it because he has given us those big performances when the team has required the most. He is a guy that needs to be backed and we as a team, as management and me as captain all back him 100 per cent,” he continued.

Speaking on who is likely to miss out owing to Rahul’s arrival, Kohli said, “I feel in a situation like this, you need to sit down and think which player has had more impact on the game. Who has been able to sort of make that difference in the game straightaway? It all depends on who has had a better game, to be honest. It’s a pretty thin line. It is a very small margin but unfortunately that is how the sport goes sometimes and things happen in a team environment. In the dynamics of a team, the guy who sits out will understand the reasons behind it.” Arjuna Ranatunga: Sri Lanka cricket is being managed in disgusting way

“Not to say that those people are not being backed but it’s whatever the best combination we as a team feel we should take on the field, we back that and we take that call. It is up to the individuals, who are involved in that decision to understand it is for the best interest of the team. Guys are professional enough to know that but I think in a scenario like this, you will always think of a guy, who has had more impact on setting up the game or winning the game for the team,” he added.

Kohli also spoke on the SSC wicket. “I had a look at the wicket yesterday, I haven’t seen it today yet. It looked pretty nice and hard underneath with good covering of grass. The last time around as well, we thought it was a great wicket for Test cricket. It is a wicket that you will get a result for sure. That excites us, it’s something that we look forward to as a team and this is the kind of wicket that we always like to play on, where we have a chance to make an impact on the game throughout,” said Kohli.

“One thing we need to be aware of is when there is a partnership or some thing happening, then we need to have more composure and more discipline at times. But as I said, there always will be a few scratches here and there when you are playing Test cricket after March,” he concluded. 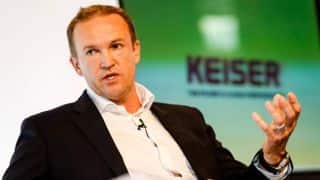 Sundries: Reverend David Sheppard and doubts in his potential flock