Kings XI Punjab won the toss and elected to field first against Royal Challengers Bangalore in Match 39 of IPL 2016.

Royal Challengers Bangalore (RCB) seem to be in trouble after Kings XI Punjab (KXIP) put them to bat first. Skipper Virat Kohli and KL Rahul were off to flying start securing 63-runs stand in 7.2 overs. Until KXIP got into attack KC Cariappa who went off the mark with first grabbing Rahul for 42 and in no time Kohli was dismissed for 20. This did not prove to be the day for captain Kohli. No.3 saw Shane Watson with a hope to build in some runs on board, unfortunately he was gone too soon with their spin attack Akshar Patel off the mark grabbing his opportunity by 8.4 overs. Watson was gone for 1. LIVE CRICKET SCORECARD: Kings XI Punjab vs Royal Challengers Bangalore, IPL 2016 at Mohali

Earlier, KXIP won the toss and elected to field first putting RCB to bat first. RCB made just one change to their side getting Iqbal Abdulla as replacement for Pervez Rasool. KXIP made two changes to their side emphasising more on their bowling department with Farhaan Berhadien and Anureet Singh playing their first IPL 9 match as replacement for Glenn Maxwell and Gurkeerat Singh Mann. RCB need to win all the matches to make some place in the playoffs. As for KXIP, they have very few matches left to play yet and that would not be enough to take them ahead in this league.

Overall, the clash between KXIP and RCB is a battle between sides with similar situations at the moment. Both the sides have quality batting line-up and what they lack is a good bowling to back them. Regardless of the result, Mohali is ensured of fireworks. 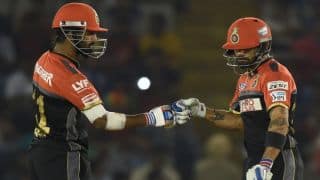