Virat Kohli on Monday expressed his happiness over his side's 278-run win over Sri Lanka.

Colombo: Indian skipper Virat Kohli on Monday expressed his happiness over his side’s 278-run win over Sri Lanka in the second Test, saying that his squad had shown a tremendous effort by regrouping despite losing some pretty close games. “It’s pretty satisfying; especially knowing the game was pretty close twice before, once at Adelaide (Australia) and at Galle as well. But I think that game (in Galle) hurt us in the right way, and commendable efforts by all the boys to regroup themselves after the loss like that, knowing that we should have won the game,” Kohli told media here. Anil Kumble: Ajinkya Rahane has silenced the No. 3 debate

The 26-year-old said the win clearly showed their improvement and desire to win. “I think it is a tremendous effort to get yourself together to put in the same kind of practice and play the same way again and actually capitalize and improve on that particular situation that we failed to do in the first Test. So, that shows that the guys are keen to improve, hungry to win, and I think, as a captain, that is very satisfying,” he said. Virat Kohli: Congratulations to Kumar Sangakkara on a wonderful career

Kohli also described spinner Ravichandran Ashwin as a champion bowler for his side, who has been taking wickets for the team everywhere. He also praised the 28-year-old for his beautiful bowling and labeled him an ‘asset’ for his team. With this win, India has levelled the series one all against Sri Lanka. The victory also saw Kohli earn his first win as Test captain. The two sides will now square -off in the series decider at Colombo from August 28. Ravichandran Ashwin, Amit Mishra star in India’s 278-run victory over Sri Lanka in 2nd Test 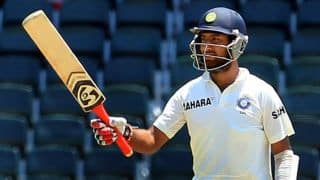