Young Virat Kohli and skipper Mahendra Singh Dhoni held their nerves under pressure with fighting knocks as India survived a few jitters before scripting a comfortable five-wicket win over New Zealand to complete a 2-0 whitewash, on Monday. 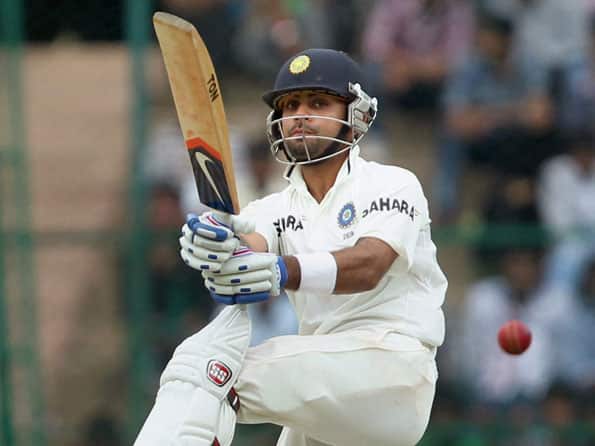 Young Virat Kohli and skipper Mahendra Singh Dhoni held their nerves under pressure with fighting knocks as India survived a few jitters before scripting a comfortable five-wicket win over New Zealand to complete a 2-0 whitewash, on Monday.

Set a target of 261, the Indians were in a spot of bother at 166 for five at one stage with three wickets falling in quick succession before Kohli and skipper M S Dhoni steered the team home at the Chinnaswamy stadium with an entire day to spare.

Dhoni smashed a six off spinner Jeetan Patel to finish off the match in style and in the process became the most successful captain by winning 14 Test matches at home, eclipsing Mohammed Azharuddin’s record of 13 wins.

As the ball sailed over deep mid-wicket, scenes of wild celebrations erupted at the stadium while the Indian players stood at the dressing room to applaud the heroics of Dhoni (48) and Kohli (51), who put on an unbeaten 96-run partnership to guide the team home.

New Zealand made an emphatic comeback in the final session picking up wickets of Sachin Tendulkar, Cheteshwar Pujara and Suresh Raina in quick succession, which jolted the Indian dressing room for a brief period.

Tendulkar lost his middle stump playing across the line on an uneven pitch and Pujara was snapped up by Daniel Flynn at forward short leg.

Raina, who had pulled out India from a hole in the first innings with his magnificent 55, threw his wicket with a reckless shot as he was castled by Patel.

Dhoni and Kohli, however, took the attack to the New Zealand’s territory, treating Patel and Tim Southee mercilessly, hitting boundaries at will.

Dhoni and Kohli particularly targetted Patel to unsettle him as he was getting some turn and bounce on the uneven fourth days’s wicket.

A six by Dhoni off Patel infact prompted Taylor to bring in paceman Tim Southee who put brakes on the duo for some time.

Earlier, a steady and unbeaten 64-run stand between Pujara and Tendulkar helped India reach 147 for 2 at tea, needing 114 runs more to win on a rain-hit fourth day.

Pujara was batting at 41 and Tendulkar at 23 when the play stopped and did not resume resulting in an early tea break.

New Zealand pacers had a plan cut out for Tendulkar, making him play most often, as he was not in great form. They had Tendulkar in a spot of bother after the Mumbaikar survived two loud appeals for an LBW off Boult and Bracewell.

Pujara broke the shackles by plundering 12 runs in an over, dispatching Boult for a couple of exquisite boundaries, taking India?s total past 100.

Tendulkar then turned the screws on against Bracewell thumping him for two consecutive boundaries.

Southee, in his second spell after lunch, made most of the uneven bounce in the pitch by swinging and banging in the ball short to make batsmen play awkwardly.

On 37, Pujara got a life as stand-in wicketkeeper Brendon McCullum missed a straightforward stumping chance off Jeetan Patel when India were 134 for two.

Tendulkar unleashed a couple of delectable shots off Southee, first standing tall punching off the backfoot and driving through offside, much to the delight of the boisterous spectators.

Earlier, the openers gave a rollicking start to India’s chase before departing in quick succession as the hosts reached 88 for two at lunch.

Virender Sehwag (38) and Gautam Gambhir (34) put the Kiwi attack to sword to give a perfect start to India with their entertaining stand of 77 in under 12 overs.

As India raced to 77, Taylor brought Patel, who did not disappoint the captain. Patel flummoxed the dangerous Sehwag, who struck seven fours and six, with a flighted ball which disturbed his off stump.

After Sehwag’s dismissal, the runs dried up for India and that brought New Zealand back into the game. It played on the patience of Gambhir and prompted him to fish outside the off-stump losing his wicket to Boult.

In the morning, New Zealand were skittled out for 248 runs setting India a target of 261 to win.

The New Zealand second innings folded after pacer Zaheer Khan claimed wicket of Patel, who hammered two boundaries of the 16 runs scored today in a bid to get some vital runs on the board for Indian batsmen to chase.

Patel was caught behind by Dhoni for a gutsy 22 runs off 27 balls.

Off-spinner R Ashwin was the star bowler for India as he led the attack by scalping five wickets for 69 runs. He was ably supported by Pragyan Ojha and Umesh Yadav, both claimed two wickets each. (PTI)