After the pay hike this year, BCCI pays INR 2 crores to Grade A players, INR 1 crore to Grade B players and INR 50 lakhs to Grade C players.

After the pay hike this year, BCCI pays INR 2 crores to Grade A players, INR 1 crore to Grade B players and INR 50 lakhs to Grade C players. But Virat Kohli, MS Dhoni and Ravi Shastri had demanded for pay hikes after observing the increased revenues of the BCCI in connection with the IPL between 2018 and 2023. In a meeting held between CoA and Kohli, Dhoni, Shastri in Delhi, the former had accepted the pay hike demands on the basis of common grounds. Kohli had also raised concerns over cramped scheduling of matches. CoA had mentioned they would look into the matter henceforth.

However, the much-hyped follow-up meeting between Kohli, Dhoni and Shastri that was to take place on December 6 will be postponed. CoA chief Vinod Rai had asked the BCCI officials to provide him the exact pay structure and system that BCCI has thought through for the players. It is learnt that the officials cannot do so before December 6. The other reason for postponement is understood to be the disparity between the payment figures and facts.

Kohli and Dhoni wanted to understand how the board spends the money received through sponsors, both for series and team logo. They wanted to know if the top players would receive some share from the sponsorship money or it would be distributed amongst the state associations. Rai has posed his queries to the board based on the demands of Kohli and Dhoni.

During the first meeting, the players were not given a clear picture of the payment structure. However, when asked for clarity on the matter, even the BCCI officials were unsure. 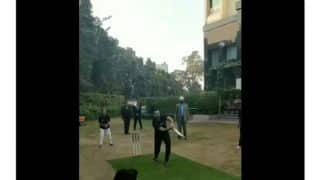