Virat Kohli missed out on his 18th century and skipper Mahendra Singh Dhoni's brisk 51 not out as India posted a daunting total of 288 for seven against the West Indies in the second One-Day International (ODI), at Dr YS Rajsekhara Reddy Stadium in Visakhapatnam on Sunday. 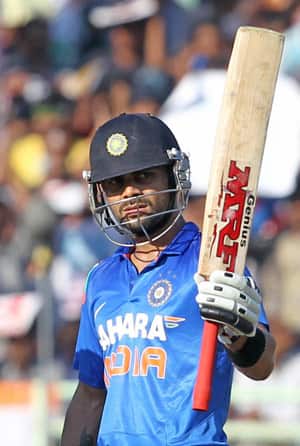 Virat Kohli missed out on his 18th century and skipper Mahendra Singh Dhoni smashed a brisk 51 not out, as India posted a daunting total of 288 for seven against the West Indies in the second One-Day International (ODI) at Dr YS Rajsekhara Reddy Stadium in Visakhapatnam on Sunday.

Put in to bat first, India’s batsmen barring Kohli and Dhoni failed to convert starts into big scores as the West Indies bowlers were impressive. Ravi Rampaul was the pick among the bowlers as he claimed four wickets for 60 runs off his 10 overs. This is Rampaul’s third best performance of his career against India.

Kohli cracked nine boundaries in his innings of 99, that came off 100 balls. Dhoni, whose late blitz help India set a daunting target, smashed three boundaries and four sixes to score 51. The innings of 51 not out is Dhoni’s 50th half-century in ODIs.

India began on a scratchy note as they lost their star opener Rohit Sharma early on for 12. Rohit had a forgettable outing in the match as a lose shot off Rampaul in the fifth over of the game cost him dearly, as he was caught by Darren Sammy at the second slip after getting an edge.

Rohit’s dismissal brought another in-form Indian batsman Kohli at the crease as he teamed up with Shikhar Dhawan to bail their side out of trouble.

The early loss in form of Rohit had a little impact on Dhawan, who hit a couple of cover drives to score a brisk 37-ball 35, before being trapped in front of the wickets by Veerasammy Permaul in the 14th over of the game.

Yuvraj Singh, who has had a poor run in the recent past, started off on a nervous note with the West Indies spinners troubling him. But the left-handed senior Indian cricketer got some momentum when two fine sweeps shots were hit off Permaul for boundaries.

The 31-year-old particularly struggled against Sunil Narine, but on one occasion he got the better of the mystery spinner. In the 25th over, Narine put one in the slot outside the off-stump for Yuvraj to go for the big hit, and the Indian batsman acknowledged it with a huge six over midwicket region. However, Yuvraj never looked comfortable and his struggle was over when he was caught while trying to clear the fielder at short midwicket off Sammy in the 28th over.

At the other end, Kohli went about his innings with relative calmness and composure. While Dhawan and Yuvraj failed to convert starts, the right-handed Kohli dropped the anchor and brought up yet another half-century — his 28th in ODI cricket.

Kohli curbed his attacking instincts and looked for more singles and doubles, and hit only four boundaries off 59 balls as he completed his fifty. However, there was a nervous moment for the 24-year-old when West Indies captain Dwayne Bravo dropped a tough return catch in the 31st over.

Kohli’s stay at the crease was crucial for the hosts, as he was involved in two crucial partnerships. Kohli added 69 runs for the third wicket with Yuvraj and after the latter’s dismissal he teamed up with Suresh Raina to add another 65.

Raina and Yuvraj, the two Indian batsmen who haven’t had good run in the recent past, failed once again as they were dismissed for 23 and 28 respectively.

Towards the end of the innings, a rapid knock of 51 from Dhoni pushed India to a big total. In the last five overs the hosts picked up well, smashing 62 runs. Ravichandran Ashwin too contributed few quick runs, scoring 19 with the help of two fours and a six.

Ashes 2013-14: Australia's all-round show against England and other talking points from 1st Test