West Indies clinched their second World T20 title after their four-wicket win against England on Sunday.

International Cricket Council (ICC) has announced the team of the tournament for the T20 World Cup 2016. Virat Kohli has been named as the captain, while Ashish Nehra is the only other Indian player in the list. West Indies beat England by four wickets in the T20 World Cup final at Eden Gardens, Kolkata on Sunday, clinching their second World T20 title. They became the first team to win two World T20 titles. From the West Indies team, Andre Russell and Samuel Badree have been included in ICC’s XI, where as Jason Roy, Joe Root, Jos Buttler and David Willey make it to the side from England. FULL CRICKET SCORECARD: England vs West Indies, ICC World T20 2016, Final at Kolkata

No other team has more than two players in the ICC XI barring England, who have four. Australia all-rounder Shane Watson also makes the cut along with Quinton de kock, who is the designated wicketkeeper ahead of Buttler. New Zealand’s Mitchell Santner was exceptional in the tournament and he too features in the list, while Bangladesh pace sensation Mustafizur Rahman has been named as the 12th man. READ: Marlon Samuels, Carlos Brathwaite massacre England as West Indies win ICC T20 World Cup 2016

West Indies were beaten just once in the entire tournament, where they were beaten by Afghanistan in their final group stage match. England on the other hand lost to West Indies in the group stages, before losing to them in the final again. Marlon Samuels was the star for West Indies for his unbeaten 85. Kohli was adjudged the man of the series for his impressive show with the bat for India.

India crashed out in the semi-final stage as they lost to the West Indies, whereas England thrashed New Zealand in the last four to make it to the final. 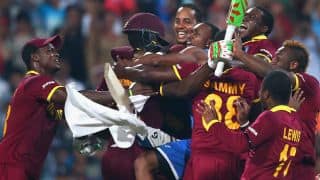 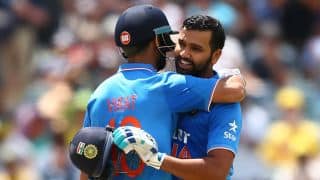