Virat Kohli One of The Players You Shouldn't Provoke: Rashid Latif

Virat Kohli One of The Players You Shouldn't Provoke: Rashid Latif

Laitf backs his claim citing two examples - one India's tour of Australia in 2014 and second from a T20I series against West Indies. Former Pakistan captain Rashid Latif counts Virat Kohli among the players who level up their game on being provoked.

Laitf backs his claim citing two examples – one India’s tour of Australia in 2014 and second from a T20I series against West Indies.

During the highly-charged tour of 2014, Kohli and few Aussie players including David Warner and fast bowler Mitchell Johnson were involved in heated on-field exchanges. Kohli, who midway through the four-match Test series became the captain, struck centuries in each innings of Adelaide Test, finishing as the second highest run-getter of the tour behind Australian Steve Smith.

“There are some players you shouldn’t mess with. We had Javed (Miandad) bhai, Viv Richards, Sunil Gavaskar. Today, Virat Kohli is one such player,” Latif said during an interview.

He continued, “In 2014 series, when (MS) Dhoni retired after two Tests, there was one Test, in which Kolhi scored century in each innings. In that match, Johnson sledged Kohli, and it got heated. Watch that clip, and you will see how Kohli reacted,” Latif said.

Known for his trademark notebook celebration in which he mockingly ticks off names of batsmen he gets out, Williams had done the same against Kohli earlier and the India captain remembered, imitating the bowler after having hit him for a six en route to a match-winning 94 not out in Hyderabad.

“Recently, in a T20I match against West Indies, a left-arm pacer (right-arm pacer Williams) had something to say to Kohli. Against his nature, Kohli went on to play a blistering T20 innings. There are certain players you don’t mess with during a match,” Latif recalled. 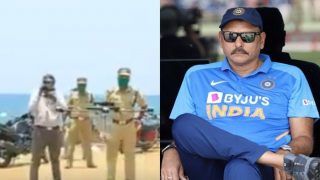 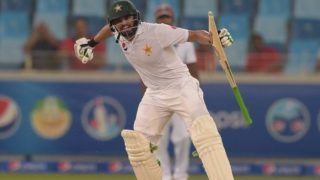