More than 34,000 votes were cast by people as they voted in their World Cup XI.

Sydney: India‘s star batsman Virat Kohli has made the People’s XI list for the ICC World Cup 2015 , which gets underway on February 14 in Australia and New Zealand.ICC Cricket World Cup 2015: POINTS TABLE

More than 34,000 votes were cast by people as they voted in their World Cup XI, which includes the five batsmen, two all-rounders, one wicketkeeper and three bowlers, which people think would light up the tournament more than anyone else.Kohli was voted alongside South Africa’s AB De Villiers , who recently knocked the fastest ODI ton off just 31 deliveries, and Hashim Amla, Australia’s Steve Smith and New Zealand captain Brendon McCullum, News.com.au reported. ICC Cricket World Cup 2015: SCHEDULE & MATCH DETAILS

Kohli might be going through a minor form blip but there’s no denying that the Indian batsman is one of the genuine superstars of one-day cricket, with his flawless technique, an insatiable appetite for runs and a will to win that is almost unparalleled. The all-rounders include Bangladesh’s Shakib Al Hasan and Australia’s James Faulkner.

The People’s World Cup XI are: 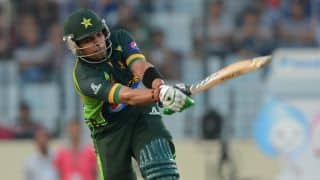