WTC Final: Hailing both the captains for leading their respective sides well, Hogg picked Williamson over Kohli as the better skipper at the moment.

Southampton: Moments after New Zealand beat India by eight wickets to clinch the inaugural World Test Championship at Southampton on Wednesday, former Australian cricketer Brad Hogg named the better captain. Hailing both the captains for leading their respective sides well, Hogg picked Williamson over Kohli as the better skipper at the moment.

“I think Kane Williamson is definitely in front of Virat Kohli at this stage with the way that he conducted himself at this stage. Both teams and captains led their teams very well,” he said on his YouTube channel.

Even Kohli lavished praise on Williamson and his team for the win. The Indian captain reckoned NZ players showed consistency and heart to pull off such a great win.

“First up, a big congratulations to Kane and his team. They’ve shown great consistency and heart, and pull off a result in three days. They put us under pressure throughout the Test and did extremely well to win,” Kohli said at the post-match presentation.

Williamson also came good with the bat in both the innings as he scored a crucial 49 in the first essay and then remained unbeaten on 52 to take NZ over the line.

“It’s a special feeling. It’s nice to get one under the belt. I’d like to thank Virat and the Indian team. The heart that our team showed was commendable. It’s the first time we have come away with a world title, and the 22 players who played a big part in getting across the line deserve all the appreciation. This will be remembered for a long time,” Williamson said after the historic win. 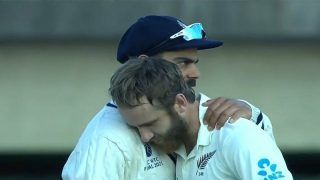