From 252 for 5 before lunch, Kohli’s single-handed effort revived India to 352 for 8 decl. Kohli hardly found support in terms of runs from the other end. He quickly reached his half-century coming back for the second session. Looking at the success Dilruwan Perera tasted in form of Ravindra Jadeja’s wicket before lunch, Dinesh Chandimal handed the ball to Rangana Herath. However, the ploy could not stop Kohli from scoring more.

Dasun Shanaka got the better of Ravichandran Ashwin, with a fuller length ball that turned in, giving Ashwin very little time to react. Ashwin, who expected the ball to hold its line, missed it completely. The delivery found its way to the stump to get the batsman bowled for 7. Wriddhiman Saha was sent down the order to anchor the innings with tail-enders.

However, Saha too was sent back soon. Shanaka allured him to drive one full length ball outside off stump. Saha routed the ball to Samarawickrama at short cover to depart for 5. Though there was a close chance of the delivery being declared a no ball, the umpire confirmed Shanaka had some of his boot behind the line.

After Saha left the crease, it was a Virat Kohli show all the way. Amidst some handsome drives, there was one instance when the umpire was convinced of Kohli being lbw – soon after the new ball was handed to Suranga Lakmal. Kohli was confident he had edged while playing across the full length ball, and his review proved him right – denying Lakmal his eighth wicket from the match.

As soon as Kohli reached his century with a six, India declared the innings. Lakmal finished with his career-best 7-wicket-haul.

India had a positive start with the ball. Bhuvneshwar got Samarawickrama bowled in the very first over of the innings. The young opener tried to cut the outswinger, and it instead took the inside edge to hit the stumps.

Within the next five overs, Sri Lanka lost their second wicket as Mohammed Shami bowled Dimuth Karunaratne for a solitary run. 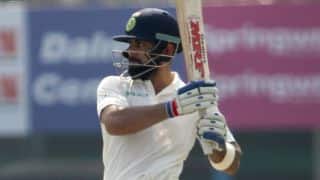 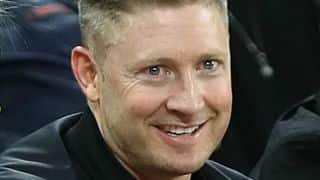