As per TV reports, The National Investigation Agency received a letter from All India Lashkar-e-Taiba, believed to be a new terrorist organisation, with a hit list containing the names of Indian cricket captain Virat Kohli and Prime Minister Narendra Modi among other senior dignitaries. In a letter to The National Investigation Agency a new terrorist organisation – All India Lashkar-e-Taiba – have listed down 12 prominent Indian personalities including India cricket captain Virat Kohli and PM Narendra Modi in a terror hit-list, claim various TV reports.

As per ABP News, the letter was sent to the NIA from All India Lashkar-e-Taiba High Power Committee Kozhikode, Kerala and that the NIA has alerted concerned security agencies regarding the same.

While the NIA and Indian security agencies have received such hit lists in the past this is the first time a cricketer has been named in the list. The reports further added that the All India Lashkar-e-Taiba, operating from Pakistan, is, in fact, the existing terror outfit Lashkar-e-Taiba, but with a new name.

As per IANS, the NIA has subsequently forwarded the letter to the Board of Control for Cricket in India (BCCI). The sources also confirmed to the news agency that the letter could be a hoax, but given the heightened threat perception, no chance is being taken and security reviews of the match venue and individual players are being carried out.

30-year-old Kohli is currently enjoying a break away from cricket after the completion of three-match Test series against South Africa. He has also opted for a mini-break from the upcoming T20I series versus Bangladesh to manage his grueling workload. 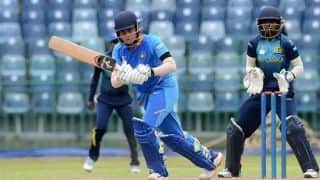