Kohli said that the bowlers performed brilliantly given they were one bowler short.

India’s stand-in skipper Virat Kohli today credited his bowlers for the series clinching six-wicket win over Sri Lanka in the third ODI, and said the home team’s bowling unit dished out a “brilliant performance” to restrict the visitors to 242 here.

Chasing a modest 242, a clinical India produced a commanding batting display to overhaul the target with 35 balls to spare and take an unassailable 3-0 lead in the five-match series at the Rajiv Gandhi International Stadium.

If the bowlers, led by Umesh Yadav (4-53) and Axar Patel (3-40), set up the win by restricting the visitors to 242 on a good batting track, then the Shikhar Dhawan (91 off 79 balls) inspired batting line-up did its job to make the opponents look ordinary yet again.

“That was a brilliant performance, especially with the ball, given we were one bowler short. We had to string in six overs from part-timers to restrict them (Sri Lanka) to 242. It was a fantastic (performance),” Kohli said at the post-match presentation ceremony.

Kohli himself completed a milestone today as he became the quickest cricketer in history to reach 6000 ODI run mark, bettering legendary West Indian Vivian Richards’ record during his 53-run knock.

“I was not sure. I knew I had to get to 50 to get 6000, but I did not know how much faster I was from the great man (Viv Richards). I am trying to do whatever I can on the field for the boys,” he said trying to be modest. Sri Lanka captain Angelo Mathews said the performance of the batsmen once again let the team down in the series.

“We flopped in our batting once again. You cannot keep repeating mistakes. 300 is a must on Indian wickets. 240 is nothing for bowlers to bowl at,” he said.

“About three-four wickets fell in the powerplay with minimum runs, which went against us. We are trying our combinations, we want to recognise our strengths and weaknesses going into the World Cup.”

Veteran Mahela Jayawardene, who was adjudged man of the match for his 118-run knock that came off 124 balls, said the visitors lacked consistency in all departments of the game. “I am surprised and a bit embarrassed to win the man of the match. We need to be consistent in our overall game,” Jayawardene said.

“The way the Indians are playing, we need 300 to put them under pressure. They are putting us under lot of pressure by picking early wickets, putting us on the back foot straight away, and we are doing repair work after that.” he added. 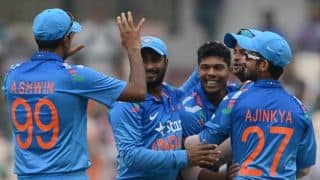 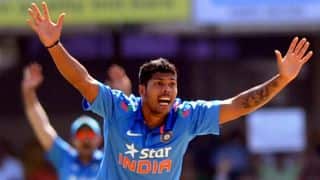 Umesh Yadav: It is difficult to say that I am a certainty for the ICC World Cup 2015