When it is about handling pressure in a power game, India‘s Virat Kohli has set examples. Before the power-packed final match of the ninth season of Indian Premier League (IPL) against Sunrisers Hyderabad (SRH) on Sunday, praising the youngsters in the team, the Royal Challengers Bangalore (RCB) skipper has said that it will be the ability to handle the pressure which is the key to success. RCB, who came into playoffs in the second position, qualified for the final defeating table-toppers Gujarat Lions (GL) in the Qualifier 1 while SRH had to win both the eliminator and Qualifier 2 in order to reach the final. Full Cricket Scorecard: Royal Challengers Bangalore vs Sunrisers Hyderabad, IPL 2016 Final

Talking to Cricbuzz, Kohli said, “We have only been speaking about one thing – that being under pressure should be a privilege for a sportsman playing at this level. That’s something that the youngsters have really picked up well. Someone like Chahal, he has played four games lesser than most and he is a wicket or two (three) lesser than Bhuvi [Bhuvneshwar Kumar, purple cap holder]. That speaks volumes of the character that some of these youngsters possess.”

“It’s just about them not getting over-excited, understanding what has given them success, and sticking to their strengths because eventually you are playing a game of cricket. There is nothing different happening out there. You are still playing a game of cricket, you are still bowling the same ball or playing the same sort of shot. It is just the occasion that sometimes gets to the players. The biggest challenge for tomorrow I guess for all the players in the side is to not look at that game of cricket as something very different. The end result is something that can make someone nervous or happy but that’s what you need to stay away from. You need to stay in the moment, stay in the process and eventually things take care of themselves,” he added. 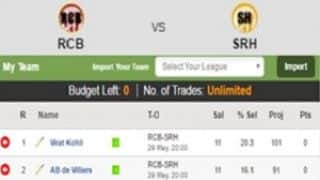