Virat Kohli proves himself as 'king of chase'

Virat Kohli proves himself as 'king of chase'

Virat Kohli appears able to produce miracles with his bat and the India captain masterminded yet another successful chase in Sunday's run-feast against England.

New Delhi: Virat Kohli appears able to produce miracles with his bat and the India captain masterminded yet another successful chase in Sunday’s run-feast against England to enhance his reputation as the second innings king of one-day cricket. Batting second allows a batsman to set his tempo according to demand, yet it is considered a true litmus test of stroke-making excellence due to the constant scoreboard pressure. This was never more evident than when the opposition racked up 350 runs and reduced India to 63-4 like England did in Pune on Sunday, threatening to spoil Kohli’s first match in charge since taking over the limited-overs captaincy.

The 28-year-old replied with a sublime 122, forging a 200-run partnership with fellow centurion Kedar Jadhav, to help India chase down the steep target with 11 balls to spare. Kohli’s ton equalled Sachin Tendulkar’s record of 17 second innings centuries, a fact made even more remarkable considering he took 136 innings fewer than the retired great, who was quick to laud the centurions on Twitter. Former England captain Michael Vaughan was far more succinct in his assessment of the India captain, who is ranked among the top two in all three formats of the game.

“VIRAT KOHLI IS FROM ANOTHER PLANET #Fact,” Vaughan tweeted, following it with another entry in which he rated the right-hander as the top batsman in each format. After winning the toss at the Maharashtra Cricket Association Stadium, Kohli was probably unsure what would constitute a good total at the compact venue hosting only its second one-day international.

Rather unsurprisingly he opted to field and despite cutting a frustrated figure as England bludgeoned India late in their innings, Kohli was calmness personified when his 27th one-day ton helped the hosts take a 1-0 lead in the three-match series. This was the third time India has chased down a 350-plus target and on each occasion Kohli has struck a century.

Since his 2008 debut, India have overwhelmed targets of 300 or more on eight occasions and Kohli failed to get a century in just two of those wins. This was also the 15th time that a Kohli ton culminated in a successful chase, more than any other batsman has managed in this format. India’s batting mainstay averages a mind-boggling 91 in successful one-day chases but his away record is slightly less impressive.

Of his 17th second innings centuries, eight came in away matches and only four outside Asia, including one in Harare. Having built an almost impregnable game and fuelled by an insatiable hunger for runs, Kohli is unlikely to settle for just South Asian dominance and will look to export his second innings excellence to grounds all over the world. Eoin Morgan: Did not expect Kedar Jadhav to come out and play like that in 1st ODI 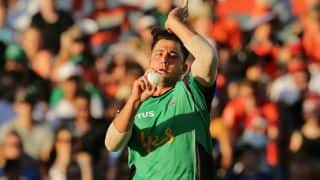