According to Sourav Ganguly, the only positive for India from the ongoing tour to Australia has been Virat Kohli's performances.

Former India skipper Sourav Ganguly has seen teammates Sachin Tendulkar and VVS Laxman perform great feats on Australian soil in person but is convinced that it is Virat Kohli who has been the best Indian batsmen in terms of performances Down Under. It is tough to debate Ganguly’s claim since Kohli has shone on Australian soil not only in his preferred One-Day International (ODI) format, but also in Test matches where he has often under-performed in other countries. In the ongoing series, although India is trailing 4-0 in the series against the Aussies (largely due to inconsistencies in the bowling), Kohli has been in stunning form. Cricket Scorecard: India vs Australia 2015-16, 5th ODI at Sydney

In fact Kohli has surpassed at least the 50-run mark in all four innings so far with 59 being his lowest score. He has also scored two hundreds and fell short of the three-figure mark by just nine runs in another innings. He is the highest run-scorer in the series at the moment. Presumably, this is what has tipped Ganguly to his opinion of Kohli. ALSO READ: India vs Australia 2015-16, 5th ODI at Sydney, Preview

“The only positive from India’s tour of Australia is Virat Kohli. He just keeps getting better and better in Australia. I have seen a lot of players do very well in Australia, like Sachin Tendulkar and VVS Laxman but I think Kohli is the best,” Ganguly told Sports Today.

Kohli will rue that his stellar performances with the bat have been undermined by lack-lustre bowling and will hope for India to take a consolatory win in the final match at Sydney on January 23, Saturday. The ODI leg of the series will be followed by the Twenty20 International series. 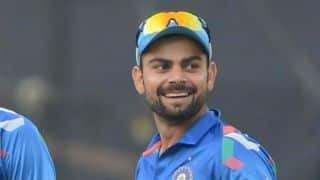