In a heart-warming message Kohli mentioned his wife as the extraordinary woman in his life who is better than equal.'

On the occasion of International Women’s Day, the Indian cricketers took to social media to wish their better halves and women across the country. Virender Sehwag was the first to send across the wishes. He saluted those women who work towards a particular cause: 9-year old Muskaan who runs a library in one of Bhopal’s poorest slum and 19-year-old Zainab who has transformed herself into an activist, committed to the cause of children s education.

Virat Kohli followed suit giving tribute to his wife Anushka Sharma. Kohli has always fought back against trolls targeted to Anushka. In a heart-warming message Kohli mentioned his wife as the extraordinary woman in his life who is better than equal.’ Ravichandran Ashwin credited his mother, wife and his two daughters for the success he has achieved in his career. Meanwhile, Rohit Sharma wants the world to recognise women by their creativity and not gender.

Tag the extraordinary woman in your life who is #BetterThanEqual @Staywrogn@AnushkaSharmapic.twitter.com/NdjNEPYQjD

Our new King Of The North, @ashwinravi99, has a special message for all you queens out there! Happy Women’s Day to all of you! #HappyWomensDay #LivePunjabiPlayPunjabi pic.twitter.com/5ICn8IcTPo Kings XI Punjab (@lionsdenkxip) March 8, 2018

9 year old Muskaan runs a library in one of Bhopal’s poorest slum, she started with 121 books. She is an inspiration. Happy women’s day ! pic.twitter.com/dWdyrt8HEM Virender Sehwag (@virendersehwag) March 8, 2018

Once she worked as a child labourer and used to stitch footballs to help her parents, now 19-year-old Zainab has transformed herself into an activist committed to the cause of children s education. Every day is #WomensDay ! pic.twitter.com/PInHpe5iRZ

To all the women – you’re unique, you’re special, and you’re empowering!

Don’t let anyone tell you otherwise. Let’s celebrate this #womensday by celebrating the diversity of women. Happy women’s day!

She rules #Happywomensdaylucky to have these wonderful women in my lifepic.twitter.com/NUqdX2WSYA Harbhajan Turbanator (@harbhajan_singh) March 8, 2018

Fortunate enough to be blessed with beautiful and strong women around me ,in my wife, mother and daughter who have all influenced ,and still playing a role in my life, and in whatever Iam today #WomansDay #WomanPower

This #WomensDay, let us all be known for our creativity and not our gender. #SeeMyCreativity #Adidas

Umesh Yadav, Suresh Raina, Harbhajan Singh and others also wished the women in their lives. 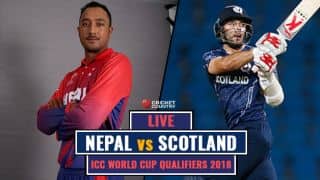