Virat Kohli and Rohit Sharma have both reached their fifties and will look to forge another big partnership now.

Virat Kohli has followed Rohit Sharma into scoring a half century against Australia in the second One-Day International (ODI) of the five-match series at Brisbane. He got to the mark with a four of the 60th delivery he faced. The pattern of scoring is looking increasingly similar to the one at Perth. Rohit got to his fifty only a while back and Kohli has come hot on his heels. Like in the first game, Shikhar Dhawan was dismissed early and from there Kohli and Rohit have been sedate and steady. There have been a few exquisite shots on display from either batsman. Both looked good of the front foot as well as the back foot. FULL CRICKET SCORECARD: India vs Australia 2015-16, 2nd ODI at Brisbane

Kohli and Rohit will want to again stage a big partnership coming of the back off a gigantic 200-plus-run partnership at WACA. Both batsmen have had their share of streaky moments but otherwise they have been steady. In the process they have brought up the 100-run partnership and look good for a lot more. From Australia’s point of view, a wicket here is crucial. LIVE UPDATES: India vs Australia 2015-16, 2nd ODI at Brisbane

Earlier, India chose to bat after winning the toss. MS Dhoni that India was to stick with the two spinner strategy in Ravindra Jadeja and Ravichandran Ashwin. However, in a bid to add some fire to the pace bowling department Ishant Sharma was called in for Bhuvneshwar Kumar. Ishant has enjoyed success in Australia previously. Australia’s bowling attack sees two changes with John Hastings and Richardson coming in for Mitchell Marsh and Hazlewood respectively. 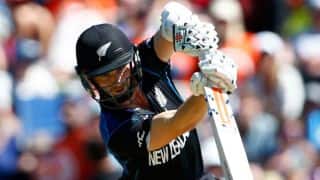