Virat Kohli will lead India in Brisbane as MS Dhoni is out injured.

Virat Kohli, the Indian captain, is ready for the the Australian challenge ahead of the first Test at the Gabba, Brisbane. Kohli will be leading India in place of regular skipper MS Dhoni, who is out injured and will miss the first Test. Kohli said that his limited overs experience as captain has been good and is unfazed by the challenge in the first Test.

Kohli was quoted by AAP, “I love leading the side. I love being captain. I don’t see any issues on why I can’t be up to the challenge. I’m pretty confident of the ability the guys have. It’s up to me how I handle them, how I handle different situations. As long as the team backs me and puts in the performances we want, I think I’m going to look good at the end of the day.”

In the lead-up to the series, Peter Siddle, the Australian fast bowler has warned Kohli of some of the banter he may get from the crowd is Australia. During the previous tour, Kohli found himself in hot water for his offensive gestures towards a crowd that heckled him. Speaking about that, Kohli said, “Well that’s for me to know and for me to experience. I’ve played against him (Siddle), he’s quite a competitive guy so I’m not surprised there’s already some banter starting from that end. I don’t mind all that.

Kohli also said that Australian skipper, Michael Clarke was unfortunate to have injured himself in the lead-up to the Test series. Kohli said, “I’ve heard about Michael Clarke’s hamstring. I’m not in a position to comment on that because I don’t know how serious it is. It’s very unfortunate for a cricketer before a Test series to have that sort of an injury.”

The first Test between Australia and India begins on December 4, 2014 at the Gabba, Brisbane. India play two warm-up encounters against a Cricket Australia XI in Adelaide before heading to Brisbane for the first Test, where Kohli will make his captaincy debut in the white flannels. 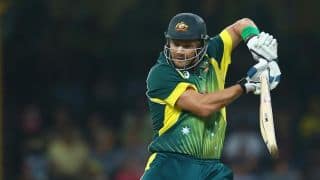