Kohli's 113 at Kanpur in India's last-over victory at Kanpur against New Zealand helped him accumulate 889 points, which is the best by any Indian batsman.

With his brilliant 176-run knock against Bangladesh, AB de Villiers had surpassed both David Warner and Virat Kohli to take the No. 1 position in ICC ODI Rankings for batsmen. Kohli then two hundreds in 3 matches to topple de Villiers and take the numero uno position once again. Kohli’s 113 at Kanpur in India‘s last-over victory at Kanpur against New Zealand helped him accumulate 889 points, which is the best by any Indian batsman. Earlier, it was Sachin Tendulkar who had gathered 887 points in 1998.

Apart from Kohli, Rohit Sharma is the only other Indian batsman in the top 10 listm while MS Dhoni bettered his position by 1 unit to take number 11 spot. Faf du Plessis climbed two spots to now sit at No. 8 while Tom Latham climbed 15 places to reach his career-best No. 23 position. Sarfraz Ahmed and Lahiru Thirimanne are the other batsmen who have bettered their rankings.

Hasan Ali maintained his reign to be at the number one position in the ICC ODI bowlers’ list while Jasprit Bumrah has achieved a new high, attaining his career-best No. 3 position. Other bowlers who climbed up the ranking were Mitchell Santner, Imad Wasim and Adam Milne.

South Africa hold the top spot for ICC ODI teams’ rankings with 121 points while India, after their 2-1 victory over New Zealand in the recently concluded series, follow them at No. 2 position with 119 points. Australia occupy the No. 3 spot. 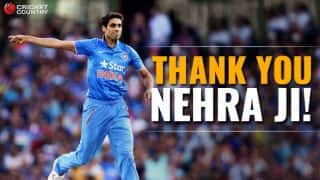 Growing up with Ashish Nehra