With this milestone and that too in his 200th ODI, Virat Kohli is now only behind his idol Sachin Tendulkar in the list of most ODI centuries.

India once were staring down the barrel, after losing Rohit Sharma and Shikhar Dhawan for 29 runs. Against a blistering Trent Boult, Kohli put a price on his wicket and made sure India do not squander on a a good batting surface.

Kohli also has most runs for a player who has completed 200 ODIs. No other Indian cricketer has got to the mark on his 200th ODI. AB de Villiers, another modern great has done the same. For that matter, Tendulkar had 18 centuries at this phase of career. If Kohli continues to achieve milestones at this phase, there is no iota of doubt that he will dethrone Tendulkar from the top spot. He is only 28, and there is no reason as to why he cannot top the century charts in ODIs. 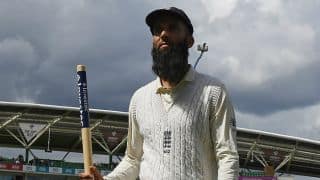