Even if the rains have stopped the final Test, nothing has stopped Team India from watching Olympics or visiting West Indies great Sir Garry Sobers. Test skipper Virat Kohli and India coach Anil Kumble together met Sobers along with Sir Everton Weekes and Gordon Greenidge, with the rains stopping the final Test to take place. It was not just Kohli who was eager to meet the legend. Looks like Sobers was equally eager to meet Kohli as well. After the meet, Kohli was in awe of Sobers and could not contain his excitement. Sobers was a freak of nature. As a batsman, he was undoubtedly the best at his time and an attacking stoke player just like Kohli. Full Cricket Scorecard: India vs West Indies, 4th Test match

Absolutely in awe of this great man, Sir Garfield Sobers. Feel blessed to have had a conversation with him #Grateful pic.twitter.com/6x6iPwQrwl

What a moment when you go to meet the great man and he says ‘i was looking forward to meet you’. Absolutely in awe of this great man. Sir garfield sobers. Feel blessed to have had a conversation with him. #grateful

Kohli has shown complete respect for the past and current legends. His previous meeting with yet another West Indies great Viv Richards shows the personality the young Test skipper carries. Meanwhile, India are placed at the top of Test rankings soon after Sri Lanka whitewashed Australia in their series. But if the rains continue to rule the final Test, India might as well give away the prize to their arch-rivals Pakistan.

The match is heading for draw as two days were washed out and West Indies managed to play just one session on Day One. Before the rains played spoilsport, West Indies ended the first session at 68 for 2. Ishant Sharma and Ravichandran Ashwin were the spearhead for picking wickets at regular intervals. West Indies have Marlon Samuels and Kraigg Brathwaite batting on the crease at 4 and 32 respectively. 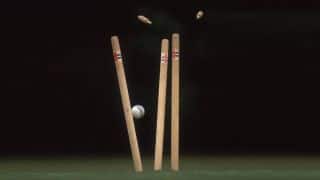 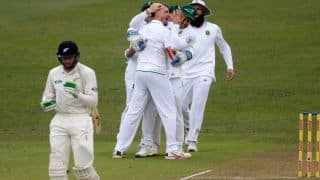