In the tweet posted on Thursday, Kohli has said that he tried his hand at trolling (the fan), but he will stick to getting trolled.

After receiving huge backlash for his tongue-in-cheek reaction to a fan, stating that those who prefer English and Australian batsmen should not live in India, Indian skipper Virat Kohli has now sent out a clarification tweet.

In the tweet posted on Thursday, Kohli has said that he tried his hand at trolling (the fan), but he will stick to getting trolled.

Kohli went on to add that his reaction was specifically to the fan saying he enjoys watching English and Australian batsmen more than ‘these Indians’, rather than taking it personally.

I guess trolling isn’t for me guys, I’ll stick to getting trolled!
I spoke about how “these Indians” was mentioned in the comment and that’s all. I’m all for freedom of choice. Keep it light guys and enjoy the festive season. Love and peace to all.

Kohli was heavily criticised for his comments he made in his official app which also prompted an adverse reaction from the BCCI.

“We, at the BCCI value our cricket fans and respect them and their choices. I loved to watch Sunil Gavaskar bat, but also loved watching (Gordon) Greenidge, (Desmond) Haynes and Viv Richards. I loved watching Sachin, Viru (Virender Sehwag), Sourav (Ganguly), VVS (Laxman), Rahul (Dravid) bat but also loved Mark Waugh, Brian Lara and so many others. Shane Warne for me has been the most exciting spinner to watch, but one felt the most thrill when Anil (Kumble) was bowling. Kapil Dev on song was a delight to watch as were (Richard) Hadlee, (Ian) Botham and Imran (Khan),” BCCI treasurer Anirudh Chaudhary had said earlier in the day as reported by The Times of India.

The video, available on Kohli’s recently-launched app, shows him expressing his disapproval after a fan called him an ‘over-rated batsman’ and that he prefers watching English and Australian batsmen instead. After reading the message out loud, Kohli replied: “Ok, I don’t think you should live in India then… you should go and live somewhere else, no? Why are you living in our country and loving other countries? I don’t mind you not liking me, but I don’t think you should live in our country and like other things. Get your priorities right.” 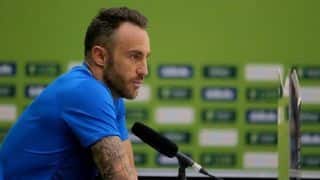