Both athletes have released their first short videos using Unscriptd’s proprietatry publishing platform, and have connected with their fans in India and across the globe. In his debut video, Kohli shares the best advice he received from a coach to date, while Rohit spoke about his cricket idol, Sachin Tendulkar. Within 48 hours of being shared on social media, the videos received a combined total of more than 900,000 views. As the second most popular sport globally, cricket has seen a tremendous increase in popularity on social media. T20 World Cup 2016: Virat Kohli named Man of the Tournament

Virat Kohli has 34.1 million fans on Facebook and Twitter, and is the most followed active cricketer, while he (Virat) has 2 million followers on Instagram, the only cricketer to reach that figure. Rohit Sharma has 11.7 million followers on Twitter & Facebook, and 665k followers on Instagram. Making them two of the most followed global athletes. Both athletes joined ‘Unscriptd’ to share their personal stories through short-form video and to amplify their global reach. “Unscriptd is enjoying explosive growth, and in the lead up to the T20 World Cup and Indian Premier League, both in India, we’re thrilled to announce the addition of two of the worlds best and most popular cricketers to Unscriptd,” said Brent Scrimshaw, CEO of Unscriptd. 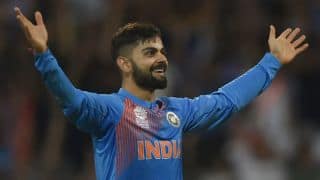 Photo: Shikhar Dhawan unwinds with a head massage from grandmother after a difficult World T20