India and South Africa will lock horns in the penultimate Test starting from January 13 at Centurion.

India had South Africa under the pump. They then fought back hard. But, they were against one of the fieriest pace attack and in pursuit of 208. The famed Indian batting lineup fell like nine pins to lose the first Test by 72 runs. Vernon Philander spearheaded the pace attack and ended with a career-best figures of 6 for 42. Virat Kohli admitted that few dropped chances and losing wickets in bunch cost his side the match. However, the captain also underlined few positives and hopes to rectify mistakes going forward in the three-match series.

“If we had taken our chances in the first innings, even after them counter-attacking, we could have kept them to 220 which would have been ideal. We’re not a team which thinks of what-ifs though. Losing wickets in bunches is something we have to plug in. We were pretty much in the Test match on all days. We were thinking 250-275 (the target) if they play well. To restrict them to 210 was an outstanding effort. We needed someone to get a 75-80. Credit to them, they were a bowler short and still bowled their heart out. We need to rectify our mistakes also. Mini collapses in both innings is something we have to think about, how to string in partnerships. This game is all about stringing in partnerships. They did that better than us,” pointed out Kohli.

India conceded a vital 77-run lead but came out all guns blazing in the second innings. Restricting South Africa to 130, they had a realistic chance of becoming the first Asian side to win in Cape Town. However, they were mauled by Philander’s efforts.

Kohli, in addition, credited his bowlers for learning quickly despite providing few extra runs in the first innings. From the batting lineup, he gave a thumbs-up to all-rounder Hardik Pandya for his gutsy 93. Pandya, coming in at 76 for 5 in the first outing, played a counterattacking knock to keep India alive in the contest before eventually falling apart.

“Bowlers learned pretty quickly from the first innings, whatever mistakes needed to be corrected. We kept pulling things back against a side which is very strong at home. Still feeling good about how we went about this Test match. The mindset matters when you’re traveling away from home on pitches which challenge you. Need to be positive in defence and when you’re leaving also. You need to grab scoring opportunities. He is (Pandya) a strong character. He backs himself and we believe in him. He’s performing for us now, even away from home. That knock was brilliant, showed a lot of character,” concluded Kohli.

The second Test starts from January 13 at Centurion. Faf du Plessis: South Africa’s plan was to have a crack at India before end of Day 4 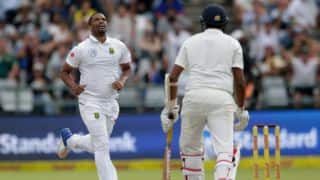