Former Pakistan skipper Wasim Akram feels the appointment of Virat Kohli as India's vice-captain for the Asia Cup will "hurt" senior players such as Virender Sehwag and Gautam Gambhir. 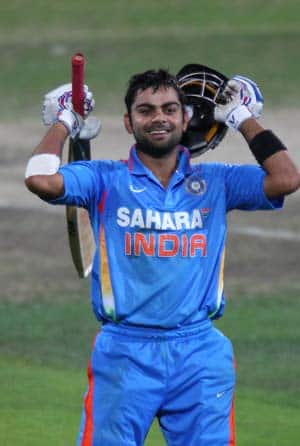 Former Pakistan skipper Wasim Akram feels the appointment of Virat Kohli as India’s vice-captain for the Asia Cup will “hurt” senior players such as Virender Sehwag and Gautam Gambhir.

Kohli on Wednesday was named M S Dhoni’s deputy for the upcoming tournament, to be held in Bangladesh and Akram feels seniors players won’t be happy as they were eyeing captaincy.

“It is a tough job to be India’s vice-captain. I feel senior players like Sehwag and Gambhir will not be happy with this. Kohli has showed his true potential on this Australian tour and emerged as a candidate for vice-captaincy.

“The Indian selectors are probably thinking about the 2015 World Cup and if Dhoni is unfit before that, Kohli would be the right man to replace him. But, this will definitely leave Sehwag and Gambhir hurt as they were waiting for captaincy,” Akram was quoted as saying by ‘espnstar.com’.

Even as Kohli was made vice-captaincy after his heroic knock against Sri Lanka in the CB series, Sehwag was ‘rested’, according to selection committee chairman Kris Srikkanth.

“Maybe the Indian selectors are not bold enough to drop a player like Sehwag. I do not think this is the right attitude.

Until and unless you drop someone, how will the hunger to do well and make it back into the team be visible in a player?

“The concept of ‘resting’ an out-of-form player never made sense to me and it baffles me again. A player plays or he is dropped, it’s simple,” Akram said.

The legendary pacer said that Sachin Tendulkar should look to score his 100th international century during the Asia Cup and then quit the 50-over format.

“There is pressure and stress on Sachin to get that milestone. If he can score this hundred in Asia Cup and get the monkey off his back, then he must look to quit ODIs and concentrate only on Tests,” Akram said.

“He should then play Test cricket in a relaxed manner.

This will also give chance to younger players to build the team ahead of the 2015 World Cup.”

As far as Ashok Dinda’s selection was concerned, Akram was pleased.

“He runs in and I like his attacking attitude as a fast bowler. I think justice is done that his domestic performance has brought him back into the team. He took wickets for Bengal in one-dayers and he showcases the firepower that Bengalis are known for.”

Akram did not back the Indian selectors’ decision to rest promising pacer Umesh Yadav.

“Perhaps the selectors are looking to develop him into a Test bowler like Ishant Sharma. But this is not right decision as you cannot expect a 24-year-old like Umesh to be tired after one series. You need to play a genuine pacer to win games, in both Test and ODIs, more so when you tour abroad.”

“It is good that India have unearthed a quickie in Umesh who will be kept in the mix for the future. However, I am disappointed with Varun Aaron. It seems he is never fit. Hope Umesh and Aaron don’t end up like RP Singh and Munaf Patel.

About Zaheer Khan, Akram said the left-arm seamer should consider his future in the shorter format.

“I think it is time for him to consider his future in the shorter format. He did exceptionally well in the four Tests against Australia but his body is not supporting him in ODIs.

As for his selection, you can pick and choose which games you want to play on tour and which you do not wish too. If you are picked, then you must play all games.

“Again, I think India do not know how to make long-lasting fast bowlers. I remember Imran Khan used to toil with us by making us bowl continuously for a long time. For Zaheer, he must choose his format now.

Akram was also delighted to see Yusuf Pathan returning to the squad.

“Yusuf Pathan is 29 years now and I still don’t know why he was not picked for so many games. Here is a hitter who is feared by most attacks in the world and he was dropped for a long time. I feel if India are looking at the 2015 World Cup then Yusuf Pathan must definitely remain in the scheme of things.” (PTI)

2. Virat Kohli – a chunk of coal that turned into diamond under pressure

3. Virat Kohli: Some parallels with Sachin Tendulkar, but…

4. Kohli-powered India will be a fire-up unit should they make it to the CB Series finals