Indian captain Virat Kohli's century powered his team to 311 in their tri-series encounter against the West Indies at the Queens Park Oval, Trinidad. The openers gave India a bright start, but they lost their way after that. However, Kohli turned the game in the slog overs as he pushed India beyond 300 and also got his hundred. 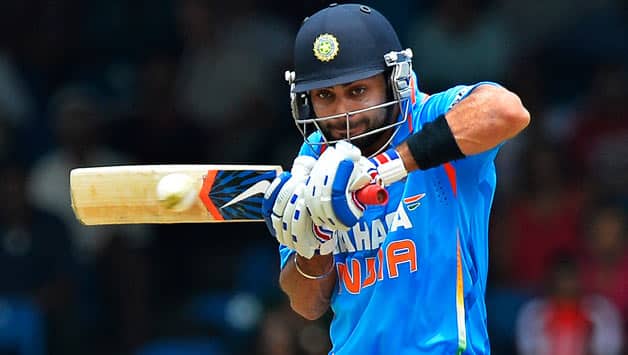 Indian captain Virat Kohli‘s century powered his team to 311 in their tri-series encounter against the West Indies at the Queens Park Oval, Trinidad. The openers gave India a bright start, but they lost their way after that. However, Kohli turned the game in the slog overs as he pushed India beyond 300 and also got his hundred.

West Indies were bolstered by the return of their captain Dwayne Bravo as he came in place of Devon Smith. India made one change to their side as Shami Ahmed made way for Bhuvneshwar Kumar. West Indies won the toss and put India in to bat.

There was an obvious change in tactics for the Indian openers as they were cautious and measured in their approach. Both Rohit Sharma and Shikhar Dhawan weren’t their usual aggressive selves and were content in farming the strike over and targeting the odd boundary ball. India’s 50 came up only in the 12th over.

Rohit continued to play cautiously, but Dhawan started expanding his strokes. There was a mix of deft touch and power as he had even charged to Darren Sammy to smash a signature cover drive  for four. Dhawan got to his fifty off 68 balls, as the opening firm put up three figures.

Thereafter, Dhawan stuck into Narine as he swept him for two consecutive sixes. He then punished a short ball for four through mid-wicket as India milked 19 off that over (23rd). Narine was stunned. However, Dhawan went too far as he tried to attack Kemar Roach and holed out to square leg.

Rohit too perished for 46 as he tried to run one down to third man. From there on, it was left to Kohli to take charge. Suresh Raina and Dinesh Karthik didn’t last long and Murali Vijay entered the stage.

Having been dropped from the side for the tour to Zimbabwe, Vijay had a point to prove and looked determined. He essayed a few good strokes through the off-side and was finding the boundaries with easy. He had sped away to 27 off 17 balls when he guided the ball into the hands of point. Ravindra Jadeja was run-out soon after.

The good work of the openers was being wasted as wickets were falling at regular intervals. Kohli was the only one who held fort after that partnership and India needed him to see it right through. With a little more than eight overs to go, he had to take control.

Kohli got to his first fifty as India captain as Ravichandran Ashwin joined him in the middle. The Indian captain’s innings was full of class as he played with delicate timing through the off-side and also pulled anything short. He turned the game on its head by attacking the West Indian bowlers. He pulled anything short to the boundary and also made room to cart it through the off-side.

West Indies bowlers were bleeding runs. Even Ashwin joined the party as he pulled off two boundaries in the 48th over bowled by Bravo as India hit 17 runs off that. Meanwhile, Kohli was marching towards his hundred with boundaries. He maintained his balance and played through the line.

India got to 300 in the penultimate over as Kohli moved into the 90s.  In the final over, Kohli got to the milestone and his smile indicated relief. He was dismissed off the last ball of the innings as he holed out to mid-wicket.