Kohli is already missing India's one-off Test against Afghanistan due to his county commitment.

Virat Kohli s county stint with Surrey is in jeopardy after his visit to a hospital in Mumbai. Kohli visited an orthopedic surgeon, who advised him to opt out of the Surrey stint, as it may aggravate his herniated disc. In an attempt to acclimatise with English conditions ahead of India s tour of the British Isles, Kohli had signed to play 6 matches for Surrey. According to a report in Mumbai Mirror, the doctors have told Kohli that he has damaged his spinal nerves, and may even miss initial part of England tour if the injury grows worse. A surgery has been ruled out for the moment. India will be playing 5 Tests, 3 ODIs and 3 T20Is in England after 2 T20Is in Ireland.

A BCCI official said: Kohli was not to feature in the historic maiden Test match against Afghanistan next month, and now with this injury, his county stint will not take off either. Surrey, however, have denied of such a development.

Kohli is already missing India’s one-off Test against Afghanistan due to his county commitment. 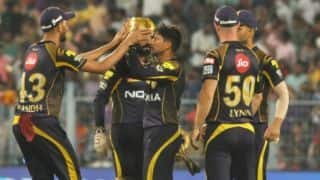