India's middle-order batsman Virat Kohli finds the new ODI rules introduced by the ICC confusing and feels that the playing condition, which allows for a run out if a batsman is deemed to have obstructed the field, is "vague". 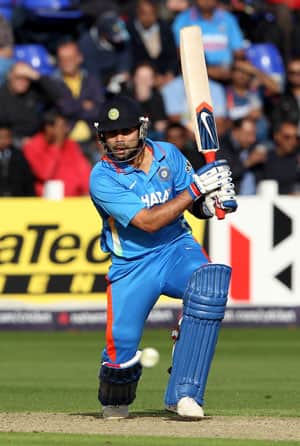 India’s middle-order batsman Virat Kohli finds the new ODI rules introduced by the ICC confusing and feels that the playing condition, which allows for a run out if a batsman is deemed to have obstructed the field, is “vague”.

The new ICC rules came into application in the ongoing five-match India-England series, the first game of which India won by 126 runs in Hyderabad.

“It is a good change. It might turn out to be more interesting and exciting eventually but in the first match it was very confusing. The run out rule is a little vague, no one knows how the obstruction rule will apply,” Kohli said on the eve of the second ODI.

According to the new rule, on appeal from the fielders, if the umpire feels that a batsman, while running between the wickets, has significantly changed his direction without probable cause (to save his wicket) when a fielder attempts to run the batsman out, should be given out “obstructing the field”. It shall not be relevant whether a run out would have been effected or not.

For making a decision to declare the batsman out obstructing the field, the on-field umpires may consult the third-umpire.

There were four run outs in the first ODI (India 3, England 1) but none involved the ‘obstructing the field’ rule.

Among the other changes, each fielding side is given two new balls to be used in alternate overs, one at each end. The mandatory change of the ball after the 34th over of an innings will not take place anymore.

The two powerplay blocks, which the bowling team and the batting team decide to take as per their wish after the end of first 10 overs (Mandatory Powerplay) will not be taken earlier than the 16th over nor be completed later than the 40th over.

Talking about tomorrow’s match, Kohli said he expects the Feroze Shah Kotla pitch to be its usual slow self and India would be relying more on the spin department to deliver the wickets on such a track.

“Delhi wicket has always been on slower side, there won’t be too much of bounce but I think this time it would be better than before for sure,” he said.

“Spinners would be our strength, we have good pacers also but spin is our strength and we will capitalise in the middle overs using our spinners,” he added.

Going into the match after a massive win in the lung-opener, India strike a confident pose after the hammering the team got in the shambolic tour to England. Kohli said the Hyderabad win was just the kind of boost India needed.

“Obviously it’s confidence booster after the England series, we have been preparing for some time. We were keen to do well. The fact that we beat them with a big margin, it was a convincing victory so it will obviously give us confidence. We will take this confidence into the next game tomorrow,” he said.

“Some youngsters have been coming up and they have done well against a strong England team. It will give them a lot of confidence and whenever in future they play for India, they will use this confidence,” he added.

Recalling the horrendous tour, during which India failed to win a single international game, Kohli said part of the disaster was also caused by weather gods especially during the ODI series.

“In England, we did really well in ODIs, we could not win because of certain unfortunate circumstances such as rain but we gave them a good fight. We have always been in a calm, confident and collected space and we always had the confidence,” he said.

On tomorrow’s game, Kohli said dew would be a factor and therefore toss would become crucial.

“There would be dew and definitely batting second would be an advantage but can’t think too much about it and work according to the situation,” he said.

Lauding young pacer Umesh Yadav, Kohli said it is great to have a speedster who can deliver yorkers in the death overs.

“We encourage Umesh to use his pace and express himself. It is an advantage that he can bowl fast in the death overs. Yorkers in death overs with good pace is always an advantage,” he said.

Kohli felt the team’s fielding is also improving even though a lot still needs to be done.

“We have started warming up with fielding now. We go and put our time on the field, try and improve as a fielding unit. If at the start of the match, we can save around 10-15 runs, it gives a strong message to the opposition also. We are putting hard work but we still have a long way to go,” he said. (PTI)

Shane Warne and I are not rushing into marriage: Elizabeth Hurley

Pakistan, Sri Lanka aim to move up in ICC rankings