It took Virat Kohli just 134 deliveries to get to his century.

India skipper Virat Kohli has scored his 12th century during the first day s play of the first Test between India and West Indies at Antigua. Kohli has looked in excellent form right from the first delivery. He put on 105 for the third wicket with Shikhar Dhawan to put India in a commanding position. Dhawan was however dismissed for 84, off the final ball before tea. Kohli during his innings also went past the 3,000-run mark. He needed just six runs before the start of the match and achieved it with ease. India lost the wicket of Murali Vijay early and also saw Cheteshwar Pujara dismissed in the first over after the lunch break. FULL CRICKET SCORECARD: India vs West Indies 2016, 1st Test at Antigua

Kohli brought up his fifty off just 75 deliveries and his next 50 runs have come at a even quicker rate. Ajinkya Rahane was dismissed for just 20 moments before he got to his century, which brought Ravichandran Ashwin to the crease ahead of wicketkeeper Wriddgiman Saha. LIVE: India vs West Indies, 1st Test at Antigua, Day 1

Earlier, India won the toss and elected to bat first. India are going in with five bowlers in this game. Amit Mishra and Ravichandran Ashwin are the two spinners for this game. Ishant Sharma, Umesh Yadav and Mohammed Shami are the fast bowlers. As far as West Indies are concerned, there are not many surprises. However, Roston Chase makes his Test debut after an excellent season with Barbados. IND vs WI Live Streaming: Watch live telecast on Ozee.com

West Indies have not beaten India in a Test since 2002. India on the other hand are in good form, having won their last two Test series under Kohli s leadership. 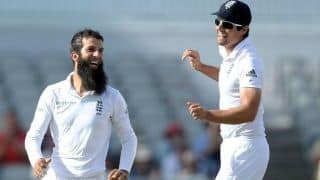