Currently, India are 193 for the loss of five wickets, with Kohli on 58, and Ravinchandran Ashwin on 19, as India trail by 90 runs vs England on day 2 of 3rd Test.

Indian skipper Virat Kohli scored his 14th half-century in Test cricket, as he hit the score on Day two of the third of the five-Test series against visitors England, at the Punjab Cricket Association Stadium in Mohlai, on Sunday. His fifty came off 11 deliveries, including eight boundaries, along with a strike rate of 51. Kohli has been in phenomenal form thorughout this series, as he was also adjudged the Man of the Match for the previous Test at Vishakahpatnam, that India won convincingly, as he continues the same good form in this Test as well. Currently, India are 193 for the loss of five wickets, with Kohli on 58, and Ravinchandran Ashwin on 19, as India trail by 90 runs. Full Cricket Scorecard: India vs England 3rd Test at Mohali

Earlier, After dominating the proceedings in the first session, India continued to have the upper hand in the third Test at Mohali as they went to tea on Day Two with the score reading 2 for 148 in reply to England s 283. In-form batsmen Cheteshwar Pujara and skipper Virat Kohli put on display all the virtues required to succeed in Test cricket as England toiled hard but failed to break their partnership. Pujara notched up another half-century in the series while Kohli is set to get to his personal milestone. The two of them are unbeaten on 51 and 40 respectively and have put India in the commanding position. Full Cricket Updates: India vs England 3rd Test at Mohali, Day 2

Earlier, Indian bowlers did not take long to wrap things up on the second morning of the third Test at Mohali as England innings was folded up for 283. Mohammed Shami took the wickets of both the overnight batsmen Adil Rashid and Gareth Batty. 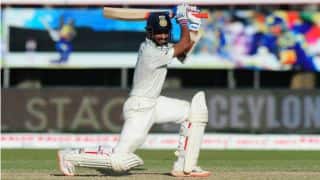 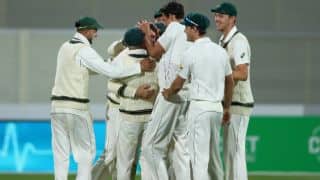