Currently, India are 190 for the loss of three wickets in 38 overs, with Virat Kohli on 50, and Manish Pandey coming in, vs New Zealand in 5th ODI.

India’s charismatic batsman Virat Kohli scored his 38th half-centuryin ODIs, while skipper MS dhoni departed for 41, off Mitchell Santner, after being trapped leg-before, against visitors New Zealand, in the fifth and final One-Day International (ODI), at the Dr. YS Rajasekhara Reddy ACA-VDCA Cricket Stadium in Visakhapatnam on Saturday. Kohli’s fifty came off 62 deliveries, including 1 boundary and a six, along with a strike rate of 85, while Dhoni fell prey to a sweep shot off a slower delivery onto the pads. Currently, India are 190 for the loss of three wickets in 38 overs, with Virat Kohli on 50, and Manish Pandey coming in. FULL CRICKET SCORECARD: India vs New Zealand, 5th ODI at Visakhapatnam 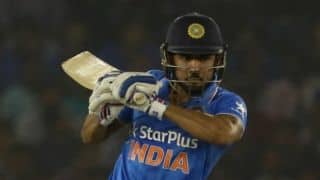