Virat Kohli has made it a habit of scoring double-centuries. He did so at Nagpur and continued his stellar show at his home ground Delhi, against Sri Lanka. Kohli became the second Indian batsman to score consecutive double-centuries after Vinod Kambli. As a captain, he holds the number of most double-hundreds. Brian Lara had five as captain.

As soon as he slammed his sixth Test double-century, VVS Laxman, Jimmy Neesham, Harbhajan Singh, Mohammad Kaif, Harsha Bhogle and likes could not stop heaping praise on the Indian captain.

Waah mere cheeteehh! Another double century!! It’s unreal how you outperform yourself each time. Keep it up stage set for 300 Go for it @imVkohli

Six double tons in just 17 months time! What an achievement @imvkohli. Proving time and again that he’s the No. 1 batsman at the moment. #INDvSL

6th double hundred for Virat in less than 500 days. Special players make it count and Virat Kohli is extra special. Amazing intent right from the beginning.#INDvSL

Short of words to describe this man. Speechless. Wherever you are, just stand up , admire and salute the genius, that is Virat Kohli. pic.twitter.com/Z041urCnYV

Hot take: Virat Kohli is good at the batting

Till 2016, Virat Kohli didn’t have a single double century. Now he has six. Shows you that great players make a good phase really count.

Congratulations @imVkohli on yet another double ton. His 6th in less than 18 months! This man is at a different level from everyone else

Six double hundreds in all of 17 months. Making batting look ridiculously easy. Can’t be right? If it was, the others would stack up the same numbers. Modern Master. #INDvSL #RunMachine @imVkohli

Kohli also completed 500 runs the ongoing series, becoming only the second Indian, after Sunil Gavaskar, to score these many runs in a series comprising of three or more Tests. 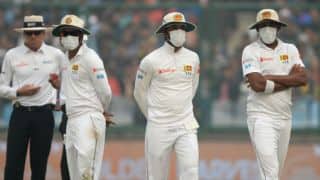 India vs Sri Lanka, 3rd Test: Ravi Shastri walks out to the field to protest interruptions due to 'poor air quality'