Virat Kohli's dismissal could prove out to be curtains for RCB.

Virat Kohli scores a vital half-century and was dismissed soon after that off the bowling of Ashish Nehra in Royal Challengers Bangalore (RCB) vs Chennai Super Kings (CSK) in match 20 of  Indian Premier League (IPL) 2015 at Bangalore. Kohli came in at No.3 after RCB lost their opener Manvinder Bisla for a 14-ball 17. He has looked in good form ever since as he looks to guide RCB to their first even victory at home. Live updates: Royal Challengers Bangalore and Chennai Super Kings Match 20 IPL 2015

RCB were given the task of chasing down 182 to win after CSK set the total after impressive performances from Suresh raina and Faf du Plessis. RCB got off to a steady start but have been losing wicket at regular intervals, Kohli is the top scorer of the innings and now that he is dismissed the responsibility of taking RCB home rests upon David Wiesse. Live scorecard: Royal Challengers Bangalore and Chennai Super Kings Match 20 IPL 2015

Earlier RCB had won the toss and elected to bowl first. Mitchell Starc plays for the very first time in the IPL 2015 in place of West Indies opener Chris Gayle. He made an immediate impact as he conceded just 24 in his four overs and also managed to pick up a wicket in the process. 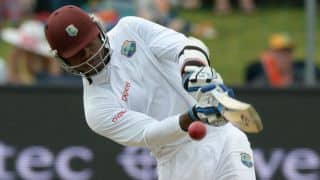 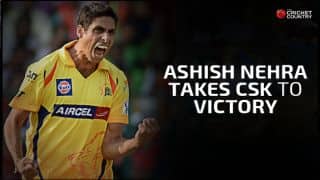