In the hoard to get the sponsorship rights of the Indian cricket team, Chinese handset maker OPPO Mobiles India Pvt Ltd had emerged as the winner after Star India ended its association. But a brand, which is not happy with the turn of events, is the rival of the mobile manufacturing company, Gionee. The reason for the two companies now in a bitter spat is because Indian captain Virat Kohli, who’s been the brand ambassador for Gionee. Kohli has now been roped in to feature in OPPO’s advertisements, being a member and captain of the Indian team.

OPPO will start the association with Team India from April 2017 for the period of next five years. The new logo of OPPO will reflect on the jersey of senior as well as junior men s and women s teams later this year, beginning with the ICC Champions Trophy 2017.

According to The Economic Times, brand experts cite similar cases to have happened earlier, especially in the time when former captain, Mahendra Singh Dhoni was associated with many brands and their endorsements. Dhoni, who endorsed the sportswear brand Reebok, created quite a stir as he has to feature even for Nike, the brand being the official kit sponsors for the national cricket team.

Harish Bijoor, a brand strategist, says that these cases are more frequent. He says, we are in an environment where brand ambassadors are in a short supply while there is a big clutter of brands. Brands will need to have a tolerance for this.

Brand ambassadors endorsing products of rival companies is not just a modern trend but is rather an age old war. In 1992, legendary basketball player, Michael Jordan who had been the face for Nike for a long time was made to wear a Reebok-made official United States Olympic Committee awards-ceremony uniform. Jordan then went to famously cover the brand logo of Reebok with the national flag of America. 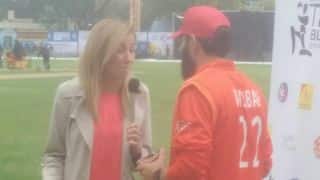