India looked primed for a score of over 200 at one stage, but WAXI pulled it back nicely in the death overs.

The Indian team playing their first warm up game of their series in Australia are off to a fantastic start in the first innings of their game against a Western Australia XI. Virat Kohli and Shikhar Dhawan headlined the Indian act and both batsmen got to amazingly fast fifties. At one stage India looked primed for a score of well over 200 but things were pulled back by the WAXI bowlers fantastically in the death stages of the game. MS Dhoni played a fine hand of 14-ball 22 to give India some impetus lower down the order after the dismissals of Kohli and Dhawan. LIVE UPDATES: India vs Western Australia XI 2015, warm-up match at Perth

Kohli and Dhawan both looked good in their backfoot shots against some decent short bowling on a spicy WACA track. Both batsmen got at least one six off a hook shot each. Rohit Sharma looked scratchy during his brief stay at the crease earlier on before being run out for six of 12 balls.

After that it was the Dhawan-Kohli show. Kohli started off quite scratchily but his innings progressed in a marvellous fashion. He started reading the pitch very well and prowled on all the poor bowling that came his way. Dhawan on the other hand took almost no time to get into his groove and played good strokes right from the first over.

Ultimately both batsmen were dismissed for an identical score of 74. Dhawan’s innings lasted 46 balls while Kohli got his runs of just 44 deliveries. After their dismissals Dhoni played quite well but the other batsmen were tied down by some tight bowling. Ajinkya Rahane was dismissed for a 3-ball 2.

In the bowling department Ryan Duffield was the most impressive conceding just 21 balls and even took a wicket. Matthew Kelly bowled very well conceding too, conceding 31 runs in his four overs while also taking one wicket. David Moody and Liam O’Connor were extremely expensive. 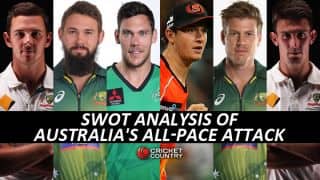