His counterpart, Faf du Plessis also scored a hundred in the first innings for South Africa, his second against India as well. With this Kohli now has hundreds in all ODI playing nations he has visited.

– Kohli misses in Pakistan and he hasn’t played there. #SAvInd

It was only earlier last month that Kohli recorded his second Test hundred in South Africa. Out of his 33 ODI hundreds, 14 have come at home, 15 playing away, while 4 have been at neutral venues.

India are 22 runs away from gaining a 1-0 series lead, currently on 248 for 2 with Kolhi and Ajinkya Rahane in the middle. South Africa, batting first, set a competitive total of 270 runs with du Plessis scoring a 120. His hundred came in 105 balls, inclusive of 9 fours. 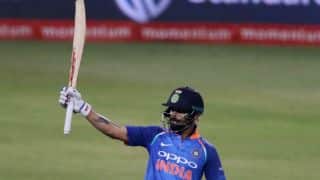