Virat Kohli, Steven Smith to bat together for Surrey this season?

Virat Kohli, Steven Smith to bat together for Surrey this season?

Mitchell Marsh was Surrey's overseas signing for the season, but he is ruled out following an ankle injury, for which he underwent a surgery in Melbourne last week.

Michael Di Venuto, Surrey’s coach, is keen to sign one of the banned Australian cricketers this County season. However, English administrators would have to allow the same. Steven Smith and David Warner have received a yearlong ban for their involvement in ball-tampering saga in Cape Town last month. Cameron Bancroft received a 9-month ban. Virat Kohli is set to play for Surrey this season. If Surrey lay their hands on the former Australian captain then fans may be treated with Kohli and Smith batting together at the crease.

Smith and Warner lost their IPL deals, worth A$2.4m each. Therefore, there is a possibility that England and Wales Cricket Board (ECB), too, would not approve of the trio playing in County Championship.

Mitchell Marsh was Surrey’s overseas signing for the season, but he is ruled out following an ankle injury, for which he underwent a surgery in Melbourne last week.

Smith and Warner are in line for 2019 World Cup selection. They will not play First-Class cricket in Australia and therefore Di Venuti believes County Cricket will benefit the players

“From an Australian perspective, it is probably important that they play a bit of cricket at some stage,” Di Venuto told cricket.com.au.

He further added: “I don’t know if they are allowed to play in this competition. I know what it states in their sanctions that they can’t play domestic cricket in Australia.

“So, if they are in the right mental state to play cricket and the ECB will have to allow it to start with, then we’d be mad not to look at some of the world’s best players potentially playing.” 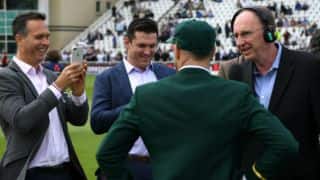