Virat Kohli is India's mainstay in their limited-overs batting.

Indian captain Virat Kohli suffered an injury during the first ODI  against South Africa at Durban. Kohli was seen limping on the ground and then going off the field to nurse his left knee. Kohli, who attempted a sliding stop in the seventh over had his knee jar into the ground against the body’s momentum after his boot got stuck. His knee landed on a soft outfield courtesy rains over the past few days. Kohli did come out to field for a few overs but went back again into the dugout for further treatment. Manish Pandey came onto the field replacing Kohli.

There has been no immediate word on his condition from the team management as off now. He was seen with an ice-pack on his knee. Soon after Kohli’s departure off the field, Rohit Sharma took over reins. Quinton de Kock was knocked over by Yuzvendra Chahal for 34. Aiden Markram playing in place of AB de Villiers, added just 9 runs from 21 balls, before becoming Chahal’s second victim. South Africa at time of publishing this report are 103 for 3 in 20.4 overs.

Kohli was back on the field standing safely in slips, just a ball prior to Markram’s dismissal. 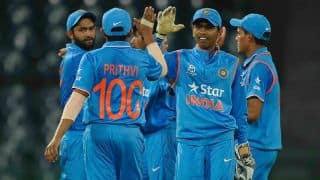 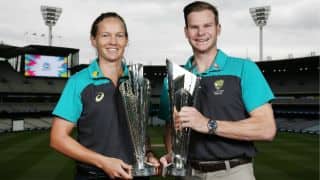