According to a report in PTI when Kohli mooted the idea, CoA chief Vinod Rai asked vice-captain Rohit Sharma, who was also present at the meeting for his view and the Mumbai Indians skipper apparently disagreed

During a recent meeting of the CoA in Hyderabad Indian skipper Virat Kohli mooted the idea of resting resting pace bowlers, especially Jasprit Bumrah and Bhuvneshwar Kumar, from the entire IPL to keep them fresh for the World Cup.

However, according to a report in PTI when Kohli mooted the idea, CoA chief Vinod Rai asked vice-captain Rohit Sharma, who was also present at the meeting for his view and the Mumbai Indians skipper apparently disagreed.

“When Kohli mooted the idea, CoA chief Vinod Rai asked Rohit about his take. Rohit apparently said, ‘If Mumbai Indians reach Play-offs or finals and if Bumrah happens to be fit, then I cannot afford to rest him’,” a BCCI official said.

The report further adds that there were not many takers for Kohli’s idea in the meeting.

“The IPL is starting on March 29 and will finish on May 19. In any case, there will be a 15-day gap before India play their first World Cup game against South Africa on June 5. So there is no chance that pacers can be rested for the entire duration of the IPL,” a senior official, who was present in the meeting, told PTI on Thursday.

Another official, who was present in the meeting, said it was “weird” that the Indian skipper was asking for all the key pacers to be rested from the IPL.

“It has been a convention for the past few years that IPL trainers and physios work with the Indian team’s support staff on workload management. That will be followed next year as well and in any case, fast bowlers don’t play all the games” the official said.

“The question is more about Bhuvi and Bumrah as Shami, Umesh and Khaleel are not automatic choices for their franchises and may not play all IPL games (minimum 14).

The official said a counter-view was raised at the same meeting.

“Virat wants his two premier fast bowlers to be rested for the IPL but it could well be counter-productive as they will be out of match practice for two months before the World Cup,” he further said. 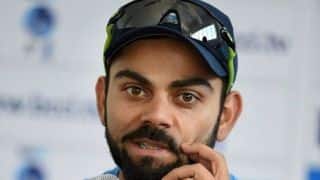