Virat Kohi took 36 innings to attain the feat, ahead of de Villiers (41) and Michael Clarke (40).

Virat Kohli became the fastest player to 2,000 runs as ODI captain, surpassing AB de Villiers. He achieved the feat during the fourth ODI between India and Australia at M. Chinnaswamy Stadium in Bengaluru. Kohli, however, departed soon after reaching the landmark. Nathan Coulter-Nile angled one in, dismantling his defence.

As skipper, Kohli has scored 8 hundreds and 10 fifties. His highest score of 139 came against Sri Lanka in 2014 home series.

In all, Kohli has scored 8,728 runs at an average over 50. He has equalled Ricky Ponting s tally of hundred (30) and is only behind Sachin Tendulkar. Kohli is also the only player to average over 50 across formats. 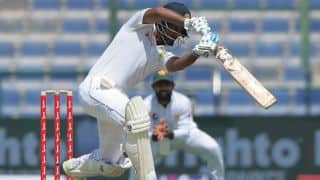