Excited to lead India for the first time in a Test, stand-in skipper Virat Kohli on Monday described it as a “big moment” of his career and said his team is determined to play aggressive cricket against Australia when the opening match gets underway. Kohli was handed the captaincy after Dhoni failed to regain complete fitness from a thumb injury.

“It is a big moment for me personally. I had always dreamt of playing Test cricket and now I am getting to lead India in a Test match. It wasn’t expected but a series of events led to it,” Kohli told reporters.

“The good thing is that I captained in the last series back home. So I had that understanding and comfort factor with the guys. And they respect what I want on the field which is most important thing and they have helped me feel relaxed about it.

“I haven’t given too much thought about being the captain though. My only job is to give them ideas and communicate better with the team. It all depends on how 10 other players play along with me. It is about 11 players and as long as they stick to the plans, I am going to look good as captain.”

It will be a change in scheme of things for Indian cricket with Dhoni ruled out. Kohli has an aggressive attitude and many will be expecting him to keep up with it whilst leading the side in the longer format, like he has done in the shorter format earlier.

“You might see things quite different from what you usually see,” said the stand-in skipper when asked about possible difference.

“I am someone who goes with what he feels so it might look funny but as long as it works, that’s fine. The intent is going to be aggressive. That’s something I use in my cricket and will try and use it in my captaincy as well.

“I don’t mind a bit of chat or banter on the field. It probably makes me more determined but it is not the only thing that makes me determined. I am focused to do well all the time.

“Last time I played in Australia I enjoyed it. It was too much for me initially and I had to take it for the first couple Tests. But after a few incidents I figured out that there is no other way of playing cricket in Australia so I rather be myself,” he added.

Hughes’ tragic death triggered a lot of debate on the use of bouncers in the Test series. While Australian bowling attack will be led by Mitchell Johnson, who loves to bowl quick and short, India too have decent fast bowlers this time, who will look to dish out the same stuff.

Asked about the bouncer theory, Kohli said: “I don’t think there is any debate. It is a part of cricket. It is every bowler’s right to use it and we have plans and we will make use of it.

“After the 2011 World Cup, rules were changed to two bouncers an over. Players didn’t ask for it. We just followed what has been given to us and we won’t change our plans. We have four bowlers who can bowl quite quick. It feels good as captain.”

When asked about Dhoni’s fitness timeline and indeed if medium-pacer Bhuvneshwar Kumar will be available for the Test as well, Kohli said, “We are expecting Dhoni to be hundred per cent fit in the next few days. We want him to be fully fit before he plays a game.

“Secondly the kind of preparation he wants in Australia, it would have been too short a span for him to go into a Test with too little or no preparation. So it is a mixture of factors really but we are expecting him to be completely fit in the next few days.

“Bhuvi is recovering from a left ankle sprain and we are expecting him to be available for selection tomorrow. That’s a call we will take after training today after seeing how he is feeling,” he added.

During India’s last Test series in England, Kohli had found out about failure perhaps for the first time in his career as he could only score a meagre 134 runs in five Tests, averaging a paltry 13.40 as they lost 1-3. Talking about that series, Kohli said: “In England I made the mistake of giving too much importance to things that are not in my control.

“But I don’t live in the past and I don’t think anyone does. I don’t want to remember what went on in those sessions or Tests. It is all about looking forward to tomorrow. If you keep sulking in the past there is no way you are going to move on in life. That’s something I believe in. I am taking this tour as nothing more than two months in my life. If I go on and do well, fine. If I don’t do well then nothing will change. I will be the same guy sitting in front of you,” he said.

India have been in Australia for last two weeks now and it has not been an easy phase for them. The sudden demise of Phillip Hughes postponed the Test series and the visitors kept themselves busy playing two tour-games.

“It was obviously a sad phase for anyone involved with cricket or even outside. We also felt a bit low in energy for the initial 2-3 days. But we tried to get on with our practice,” said Kohli, who along with a few other members of the Indian contingent had attended Hughes’ funeral.

“We stayed on track with our preparation because at the end of the day we have to move on with the game and we don’t want to be in a place where we are lacking in our preparation going into first Test.

“After attending the funeral I was as emotional as I was taken aback by the incident when I first heard it. Phillip was one of the guys I used to interact with, when he used to come on tours or even in Australia when I met him.

“I had done a camp with him in 2008 in Brisbane and knew him from then. It was equally a saddening and an emotional moment for me. But as a professional cricketer you have to move on and do what needs to be done. And move on to the next thing you have to do that is play a Test match tomorrow.” 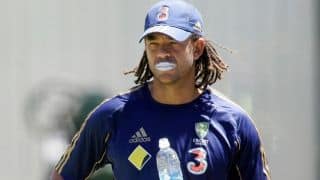 Queensland Cricket appoints Andrew Symonds as coach of U-19 team