Virat Kohli went to Maldives with family after being given a break from the IND v SA T20I series.

New Delhi: If a report in the Times of India is to be believed, ace India batter Virat Kohli tested positive for COVID-19 after arriving in India from the Maldives. Notably, Virat Kohli rushed to the hospital after landing in India from the Maldives, raising many eyebrows. However, nothing was confirmed then. Now, reports are coming that Virat was infected with COVID-19 but recovered in time to travel with the team for the England tour. Virat was seen on the roads of Leicester where he clicked photos with the fans.

“Yes, Virat too was hit by Covid after returning from holidaying in the Maldives, but he’s recovered now,” a source told TOI.

India spinner R Ashwin is also in home quarantine after testing positive for COVID-19. Notably, Ashwin didn’t travel with the team to the UK but is expected to join the squad ahead of the tour game against Leicestershire. Meanwhile, the news has raised alarm bells in the BCCI and the board concerned that a few more cases can come up during the tour. At the moment, BCCI has advised the team management to not overload players who have recovered from COVID-19. This means that there is a possibility that Virat Kohli might not feature in the warm-up game against Leicestershire. However, he has been practicing hard and sharing pics on social media.

COVID-19 is still raging in the UK, with over 10,000 daily cases. ECB has already confirmed that batting coach Marcus Trescothick has tested positive for COVID-19. Ben Stokes is also not feeling well and could miss the third Test against New Zealand, even though he has tested negative for the virus. 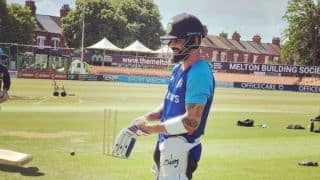